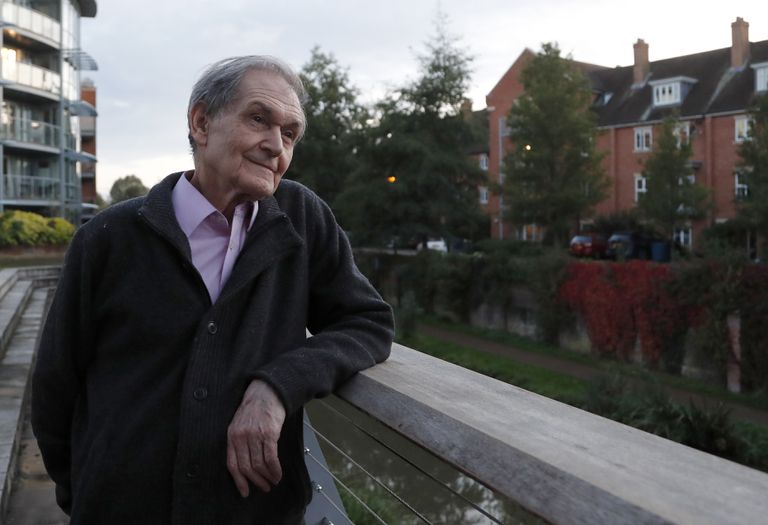 Roger Penrose, photographed at Oxford last October, has been awarded the Nobel Prize in Physics with German Reinhard Genzel and Andrea Ghez.Frank Augstein / AP I couldn't believe it. The 2020 Nobel Prize in Physics rewards a mathematical theorem! I pinch myself, but… I'm seeing it with my own eyes. I recognize on the screen the faces of Andrea Ghez, Reinhard Genzel and Roger Penrose !, who receives half the prize for a singularity theorem in general relativity. Well, what the hell is that? Nobel Prize in Physics for three researchers on black holes and the "darkest secrets of the universe" In parts. In his theory of gravitation - general relativity - Albert Einstein unified space with time, and the two were inextricably intertwined with geometry and matter. Succinctly: gravity manifests itself through the geometry of space-time, that is, its shape . Space-time is a mere expression of the existence of matter, without which it does not exist. The repercussion was immediate, unexpected phenomena were predicted that were fully verified. However, the exact models contained problem areas where the physical variables took on infinite values and space-time seemed to break down. Here are the "singularities." Of special relevance was the study carried out in 1939 by Robert Oppenheimer and Hartland Snyder of the inevitable, catastrophic collapse of spherical stars creating what, from afar, can be seen as a black hole (or hole): a mysterious modest creature that jealously hides its interior . We can never aspire to observe this, by any method, unless we enter there —- thus becoming part of it. This was a small nuisance, which was easily resolved. It would suffice to invoke the internal forces and irregularities that disrupt the star's perfect sphericity to avoid catastrophe. However, Penrose, in 1965, sent a devastating message : “None of that, friends, singularities are not a solvable nuisance. On the contrary, they embody a distinctive feature of the theory ”. Widespread commotion. Relativity is so wonderful that it includes its own limitations.

Relativity is so wonderful that it includes its own limitations

Specifically, Penrose proved a geometric theorem (since gravity is geometry) showing the existence of unwanted singularities in general situations. And incidentally contributed (at least) two key concepts: incompleteness, and trapped spheres . In a singularity, space-time is spoiled, therefore it is not in space or time. To capture its nature from space-time it is possible to use the duration of real entities. Any entity that ventures into a singularity will cease to be in space-time ... it vanishes! His profile remains incomplete. There are also abrupt materializations in space-time. So it seems to us that the universe arose!

In dynamic situations — such as those that occur in stellar collapse — area, volume, distance, etc. change over time

Now let's give an idea of what a trapped sphere is. Escaping a gravitational field takes a lot of energy. In classical physics an escape velocity is required, the initial velocity necessary to escape, the greater the more intense the gravity. But there is an insurmountable speed limit (that of light). In relativity everything gets complicated. Let's imagine a spheroid whose surface has a certain area. A multitude of tiny goblins populate the spheroid, and they fly vertiginously - even at the speed of light - in all directions to escape the gravity to which they are subjected. After a short time we designed another spheroid, the minimum that still encloses all the goblins. It seems logical that its area is larger than the original. But be careful! Gravity is geometry. In dynamic situations — such as those that occur in stellar collapse — area, volume, distance, etc. they change over time. It is possible that the final area is smaller than the original, regardless of how much the goblins have rushed, thus condemned to be confined in spheroids of smaller and smaller area. Trapped .

Using the attractive property of gravity, Penrose showed that if trapped spheres are formed, singularities are unavoidable. It should be noted that their existence is stable, that is, small disturbances do not suppress them. Therefore, since they appear in spherical collapse (Oppenheimer-Snyder), they also arise in similar irregular collapses. In silver: the formation of black holes in unstable star collapses is a robust prediction of relativity. In fact, due to universal expansion (dynamic situation) there are spheres trapped in our universe towards the past! Hawking realized this and proved in a few months several applicable theorems in cosmology.

The concept of the trapped sphere is crucial for the development of active branches of mathematics as well as extraordinarily fruitful in physics.

The concept of the trapped sphere is crucial to the development of active branches of mathematics - Lorentzian geometry, mathematical relativity - as well as extraordinarily fruitful in physics. His influence is awesome. As I pointed out and the Nobel Foundation has now recalled , Penrose's theorem was the first result genuinely after Einstein's influence : he did not foresee it, he could not even suspect it. Thus, the modern age of Relativity, its maturity, was inaugurated in 1965. With this, the hypothesis of cosmic censorship flourished (which affirms that black holes cover their intimacies to all who do not want to join them), and Penrose advocated for taking the theory's predictions seriously and exploring them in detail. Fortunately, scientists such as Ghez and Genzel took on this task, making the theoretical prediction an observed reality. This award is a great triumph of mathematical physics, but it would not be possible without the recent observations of various kinds of black holes: the detection of gravitational waves emitted in their fusion, the image of the silhouette of the huge M87 *, studies of other centers active galactics and, of course, "our black hole", Sagittarius A *. The patient study of our galactic center, carried out for almost 30 years by the Ghez and Genzel teams in the infrared, tracks individual stars orbiting something invisible, revealing the existence of Sgr A *, an object of almost four millions of solar masses extremely compact; that is to say a black hole. But that's another fascinating story. José M. Martín Senovilla is a professor of theoretical physics in the Physics Department of the University of the Basque Country / Euskal Herriko Unibertsitatea Café y Teoremas is a section dedicated to mathematics and the environment in which they are created, coordinated by the Institute of Sciences Mathematics (ICMAT), in which the researchers and members of the center describe the latest advances in this discipline, share meeting points between mathematics and other social and cultural expressions and remember those who marked its development and knew how to transform coffee into theorems. The name evokes the definition of the Hungarian mathematician Alfred Rényi: "A mathematician is a machine that transforms coffee into theorems." Editing and coordination: Ágata A. Timón García-Longoria (ICMAT) You can follow MATERIA at Facebook , Twitter , Instagram or subscribe here to our newsletter

Gloria Estefan confirms that she had covid-19 in November