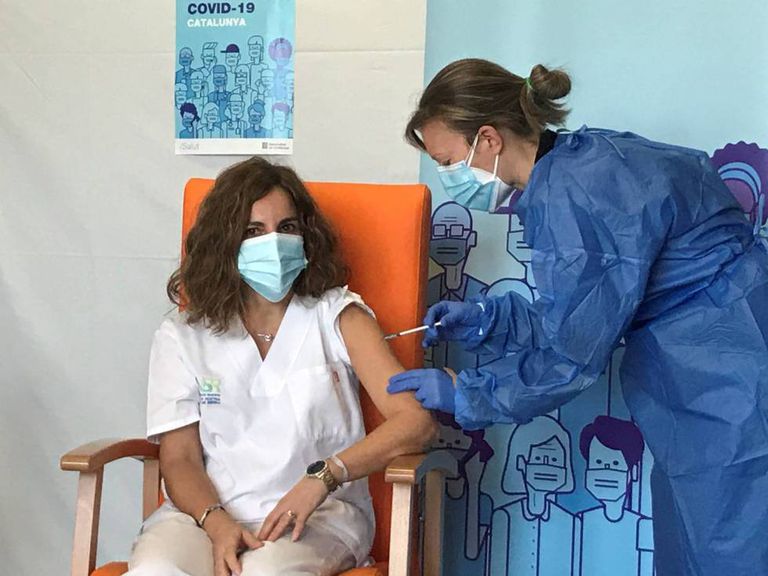 A nurse administers the second dose of Pfizer's vaccine against covid in Lleida.EUROPA PRESS

Half a hundred countries have started administering anticovid vaccines of one type or another, and nearly 20 million people have received at least one dose. Impressive no doubt, but that's only 0.3% of the world's population. Every week five million new cases are registered in the world, which transforms the vaccination campaign into a race between “injection and infection”, as the editorialist of The Economist puts it. This difficult balance reveals two things. First, that current restriction measures are insufficient to juggle the transmission of the virus. And second, that there are strong reasons to speed up vaccination campaigns. For now, in the competition between injection and infection, the second is winning. It is an unequal fight, no doubt, so we will have to find ways to speed up vaccination.

The most effective country in Europe is the United Kingdom, which started earlier and is vaccinating even in cinemas and supermarkets. This naturally requires staffing the campaign and resources. The British have achieved that their biggest bottleneck is the delivery of doses by manufacturing companies. On the continent, the funnel continues to be the availability of health personnel, because we are not achieving or puncturing the vaccines already available

At the current vaccination rate, we will not get anywhere near to vaccinate 20 million people in July, nor 70 % of the population after the summer, as outgoing minister Salvador Illa claims. Deliveries of the drug will surely grow in the coming months, both due to improved large-scale manufacturing processes and the addition of new vaccines to the scene, generally much easier to store and distribute than current Pfizer and Modern But if we do not expand the health personnel we will not be able to put them at the necessary rate. The infection will continue to beat the injection by two bodies, and the economic recovery will continue to be delayed.

Regarding the famous dilemma between the Stock Market and life, which everyone denies, but we are seeing in action daily in regions like Madrid, a report recently published by IHS Markit, the company that produces the Purchasing Managers Index (PMI ), the rising curve of the third wave has already caused a contraction in private sector activity in January. Those who defend the protection of trade against socio-sanitary arguments must understand at once that bad public health figures foreshadow a fall in economic indicators and a new stagnation in industrial activity. Until now they have behaved like tourists on a roller coaster that goes down with the confinements, goes up with the de-escalations and goes down again with each authorization of a new vaccine. It is a suboptimal strategy. The public and private sectors should now focus on adequately financing health resources to vaccinate 70% of the population in the fall. That is the formula to ' save Christmas ' this year. It's in our hands.