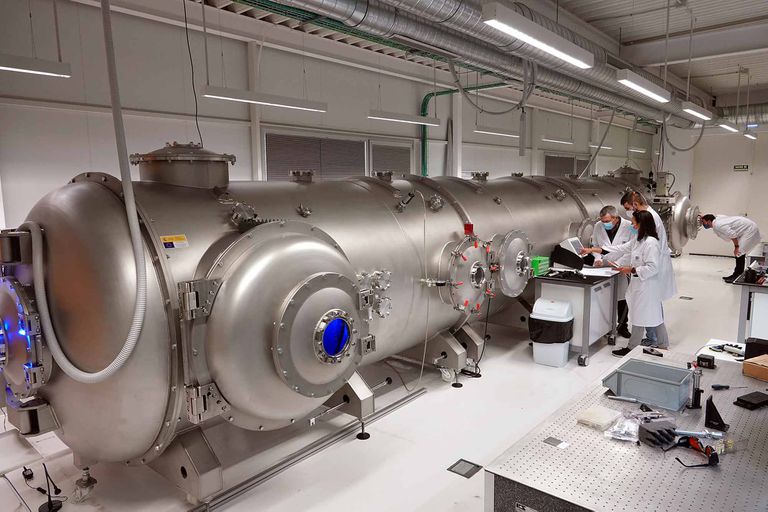 Members of the UMA Laserlab operate the Malaga atmospheric simulator.University of Malaga

"The mission of this adventure is to study the past, present and future habitability of Mars". This is how Javier Laserna, professor of Analytical Chemistry at the University of Malaga and director of the UMA Laserlab, sums up the odyssey that will begin next February, when NASA's Perseverance rover, the most complex extraterrestrial exploration vehicle to date, lands on Mars. The spacecraft has a sophisticated sampling system that will analyze the Martian surface in situ and will also collect samples that will reach Earth in the next decade. But this work requires a fundamental complement that already works in Malaga: an atmosphere simulator that reproduces certain conditions of the layer that surrounds the red planet and that allows selecting what to look for and identifying what the signals sent by the rover will correspond to. The data sent by Perseverance on the materials it analyzes are not the same as those that can be obtained on Earth with those instruments on the same materials. The pressure, one hundredth of that existing on our planet, the composition of the atmosphere, with 95% CO₂, the average temperature of -20 degrees, the level of solar radiation or the wind will make the information you provide about a carbonate rock - one of the most desired types due to possible bacterial footprint - is different from the one we know

Similarly, Perseverance has to be able to identify which samples are relevant for the investigation of the habitability of the red planet and You need to know in advance what you want to find with information adapted to the Martian atmospheric circumstances.

With this objective, Roger Wiens, principal investigator of the Los Alamos Laboratory (New Mexico) and head of the SuperCam, a system of Perseverance instruments that can detect the compounds of rocks and regolith by means of chemical composition analysis, he proposed four years ago to Laserna the construction of the atmospheric simulator .

The proposal has become a reality and is already working at UMA Laserlab. This simulator, capable of replicating the pressure, atmospheric composition, temperature, radiation and wind conditions that Perseverance will encounter in less than three months, is a chamber 12 meters long by two meters wide. The reason for its length is that the rover's technology can analyze elements at that distance.

The Martian camera has started work. According to Laserna, one of the instruments is a laser that emits impulses that collide at supersonic speed on the materials, generating a specific plasma that emits radiation and an acoustic wave. This information will be specific according to the rock or regolith on which it impacts, but always according to the atmospheric conditions of Mars. This process, which will make it possible to determine the mass and composition of the object, is already being tested in Malaga, where there is the only simulator in the world capable of analyzing how an acoustic wave behaves on the red planet.

The Laserlab facilities are also you can complete the "spectral library of minerals", a catalog that shows the reflectivity as a function of the wavelength of elements under Martian conditions. This will make it possible to compare and know what the rover analyzes.

The objective of this technology and others, such as Raman or infrared spectroscopy, is fundamentally to find traces of life , whether there were any or if there are any. In this sense, Laserna explains that the landing site is not random: “ Perseverance will land in the Jezero crater, which was an ancient lake. Sedimentary material is expected to be found and this could contain amino acid remains, of biotic origin, organic matter, which may also have a biotic origin, or remains of a lithified fossil. The isotonic composition will also be analyzed because, when there is life, there is an alteration of the physical and chemical balance. ”

The objective of this technology is fundamentally to find traces of life, whether there were any or are there.

“We are working to be prepared”, summarizes Laserna about Malaga's participation in the Perseverance adventure, which will also collect and store samples from Mars in capsules to be collected in 2024 and brought to Earth in the next decade after a 70-year trip. millions of kilometers, at which time the atmospheric simulator will also be essential.

Once on Mars, Perseverance will store rock and soil samples in tubes that it will leave on the Martian surface for the ESA Sample Fetch Rover to collect and transport, using robotic tools from the European agency, to an ascent module at The NASA. The materials will remain in orbit around Mars until they start on their way to Earth.

This entire project has received the endorsement of an independent review board , as announced by the North American and European space agencies, which participates in the missions to Mars .

“The board, after examining plans for one of the most ambitious endeavors humanity has ever attempted, has concluded that space agencies are ready for the challenge after several decades of scientific advancement and technical progress in the exploration of Mars ”, states ESA.

“ The independent review reinforces our shared vision of providing the world's scientists with pristine pieces of the red planet to study using tools and laboratory techniques that we could never bring to Mars, ”says the director of Human and Robotics Exploration at ESA, David Parker. And there is the Malaga Laserlab.

The simulator, as it can replicate certain conditions of the Martian atmosphere, can reproduce characteristics of the layers that surround the Moon or other satellites of the Solar System. "It can be used by any entity or company that needs the facilities for their scientific work," explains Laserna. The camera can, for example, serve to observe the survival conditions of Extremophilic bacteria, those capable of growing in alkaline, acidic, water-lacking environments or with pressures that are incompatible with the usual circumstances for life.

It can also be experimented with. with materials that will be necessary for manned missions or with plants, to analyze how certain conditions affect their development. "We cannot reproduce gravity," Laserna clarifies. On Mars, this is only a third of that on Earth and is an important factor.