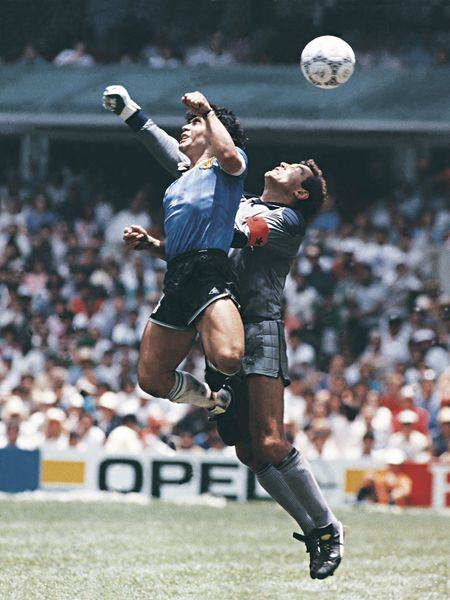 Maradona did not need to know how to explain the physical laws enunciated by Newton, and even less the combined effect of rotation and translation called the Magnus effect in honor of the German physicist Heinrich Gustav Magnus (1802-1870).

But Maradona did know the most important thing, that is, to apply physics to his game. That's why he was the best ; a footballer who sensed physical science in each kick, putting the principle of inertia in motion, transforming the rest of the ball at will, knowing that the force acting on a body is directly proportional to its acceleration

How could it not To be less, Maradona knew from experience that every action is followed by a reaction; a response of equal strength and opposite direction. For the latter, every time he saw a ball in the air, to reach it, Maradona pressed his boots to the field and bent his knees in order to propel himself, thus, with a jump, and hunt the flight of the ball. Although he did not know who Newton was, he was the most complete player when it came to interpreting the laws that govern the movement of bodies, as well as combining them with the Magnus effect when it came to “bending the ball” .

Although he did not know who Newton was, he was the most complete player when it came to interpreting the laws that govern the movement of bodies, as well as combining them with the Magnus effect when “bending the ball”

For those who do not know, the Magnus effect is called the effect that is achieved by rotating the ball on its axis; once hit, it generates a rotational flow around it that manifests itself in two inverse aspects. On the one hand, in its rotational movement, the ball advances in the direction of the air current to which it is exposed, accelerating its speed, while, on the other hand, its speed decreases, since its rotational movement is produces in the opposite direction to the flow of air. It is what is known in soccer parlance as a spin shot or "doubling the ball." Far from knowing how to intellectualize these things, Maradona put them into practice, as if he knew how to visualize the caress that mediates between uncertainty and experience.

Without leaving the field, another Argentine footballer who many call the third for going after Maradona and Messi in the ranking of the best, thought physical science applied to football. This is Daniel Passarella, who being the technical director of the Argentine team, and after in 1996, during the World Cup qualifying rounds, his players lost against Ecuador at 2,800 meters above sea level, he looked for reasons to defeat more Beyond chance.

It was when Passarella released the famous phrase "At height, the ball does not bend." In this way, Passarella denied the Magnus effect at a considerable height above sea level, something scientifically impossible, since this effect is never lost. What happens is that, at higher altitudes, this effect decreases, as the fluid in the air is lighter; air weighs less, exerts less pressure, and the effect is less. This is why it is so difficult to play soccer on fields extremely high above sea level.

Maradona was most likely to be fond of these brainy things , but he was still a soccer scientist. With his death, the field laboratory has been left without one of its best scientists, a wise man who, far from expressing laws, found mechanisms to make football a feast of the imagination.

Because science, like lies It requires imagination to make yourself believe. Already put, without imagination his most controversial goal would not have been valid, the one that scored a little with his head and a little with the hand of God. It happened in the match between Argentina and England for the quarterfinals of the 1986 Soccer World Cup. Unrepeatable.

Soccer is one game and science another. For this reason, football and science are terms condemned to be understood from the beginning of the game. From the precise moment the ball is set in motion, not only physical science comes into play, but also mathematics. Because at each vertex of a classic soccer ball there are two hexagons and a pentagon, reaching a total number of 12 pentagons and 20 hexagons. In this way, the soccer ball ceases to be a "spherical" to become a polyhedron, an Archimedean solid; a truncated icosahedron, stated exactly. Like any self-respecting polyhedron, the soccer ball also has the property that the Swiss mathematician Leonhard Euler (1707-1783) translated into a beautiful and simple formula that is expressed as follows: V - A + C = 2. With the aforementioned formula Euler demonstrated with mathematical elegance that, in every polyhedron, the number of vertices (V), minus the number of its edges (A), plus the number of its faces (C), is always equal to two. Therefore, mathematics begins to play football with a ball that, in reality, is not a ball, although it was treated as such by a footballer of the stature of Maradona. Once we have identified mathematical sciences with the genius of Pelusa, it is enough here to recall the formula that he used to get out of trouble and to reason with it his riot and bluff off the field of play: “I am sorry for 99% of everything I did in my life, but the 1%, which is football, saves the rest ”. Undoubtedly, a statement of mathematical principles with which Maradona fully complied until the end of his days. Delirious, they just need to do the math with Maradona and put his name at number 10.

The stone ax is a section where Montero Glez , with a will to prose, exercises his particular siege to scientific reality to show that science and art are complementary forms of knowledge.

From Marcus Rashford to Hector Bellerin, footballers who break stereotypes

Kengo Suzuki, the first born outside of Africa to go down from 2h 05m in a marathon