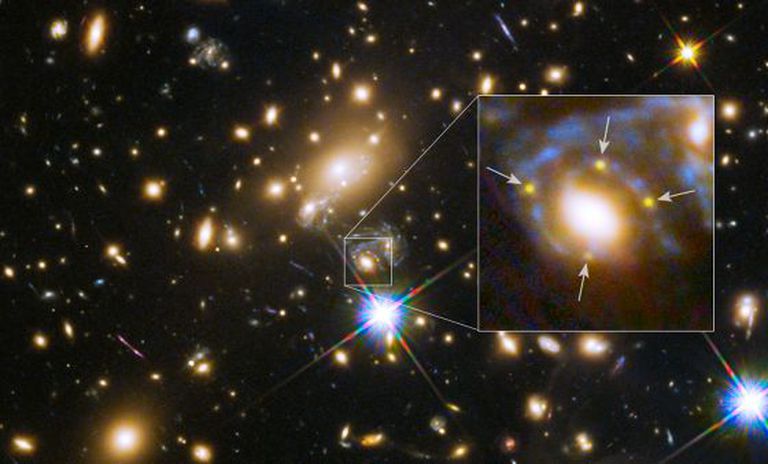 Group of galaxies MACS J1149 + 2223, 5 billion light years distant from Earth, with the supernova in the background multiplied by four times the gravitational lensing effect, photographed by the `Hubble´.

We collect some of the many questions that we have been presenting in the last articles: Are there things that we do not see and that escape our telescopes? Is there matter that neither emits nor reflects light, that passes from it completely? And if looking is not the only or even the best way to know the universe?

Actually, we already gave the answer to all these questions in the first article dedicated to light : dark matter exists yes or yes. We said that something else is the exoticism of dark matter. And for astrophysicists the concept of dark matter is exotic. We explain it below with a lot more questions:

Pre-Socratic philosophers considered that matter was made up of four basic elements and, today, we think that the existence of everything we see around us is based on four types of interactions between particles called strong, weak, gravitational and electromagnetic fields

Protons and neutrons form the nuclei of atoms, and they themselves are made up of quarks that stay together because there is an interaction called strong , which is extremely powerful, hence its name (physicists don't break your head over the names). It is so powerful that protons can stay together in the nuclei of atoms even with positive electrical charges. But the electromagnetic field, which is repulsive for equal charges, is less intense than the strong interaction at subatomic scales.

Another field is the so-called weak, which has an intensity one hundred times less than the strong interaction (hence its name, simpler linguistics for something that is not simple at all). The weak interaction is extremely important, for example it is responsible for one of the 3 quarks that make up the neutrons change their properties (the so-called "flavor", more history with the names given by physicists) and the latter are not stable, but that tend to become protons (unless they are in an atomic nucleus). This phenomenon seems of little relevance to anyone, but it explains why most of the atoms in the universe are hydrogen, and this has been able to join with oxygen to give something as important to life as water. Without the weak force, in the first minutes of the universe the neutrons would have resisted whole and would have combined with protons to form nuclei like helium, which likes to combine little, so the chemistry would have been quite boring and the world would not exist

The last fundamental interaction is gravitational, which in principle acts on things that have mass and is always attractive. Photons, which are the particle representation of the electromagnetic field, are said to be its messengers, they have no mass. Does the gravitational field affect them? If we stick to Newton's Law of Universal Gravitation, which states that the gravitational force between 2 objects depends on the multiplication of their masses, the answer would be no. But today it is proven , thanks to Einstein's General Relativity, that photons are affected by gravity, even if they are massless. The effect is extremely small, but it does exist and it gives rise to some of the most beautiful images in the universe, such as Einstein crosses , since black holes exist .

The neutrinos the Sun creates can typically pass through all of our star's material without flinching, while photons take hundreds of thousands of years.

The photons, then, which are the carriers of the electromagnetic field, are practically not affected by another fundamental force such as gravitational force. Are there particles that are not affected by the electromagnetic field and only interact with other particles through some other fundamental field? They would be particles that are not sociable with photons, of any kind, visible, X-rays, infrared, ..., that do not interact with them. The answer is yes, there are: neutrinos , which are also not related to a strong field or have a great mass to interact a lot gravitationally. We only know about them by the weak force, which is very weak, so for example the neutrinos that the Sun creates can typically pass through all the material of our star without flinching, while photons take hundreds of thousands of years. Furthermore, neutrinos pass through us and the entire Earth without being stopped or diverted (practically) by anything

Are there particles like neutrinos, but which have masses greater than them and which do not interact with practically anything of what we know, especially with electromagnetic fields? Well, the answer for astrophysicists, and for many particle physicists, is yes, they have to exist, but we haven't discovered them directly yet. These particles interact with others with weak force such as neutrinos, but they have a much greater mass. In English they would be weakly interacting massive particles , WIMP , massive particles that interact weakly.

Calling these particles WIMP is like talking about fruit, it is a very generic name, and it does not tell us much about their particularities. It could be "watermelons" or "cherries." According to our studies on galaxies, galaxy clusters and the global behavior of the universe, we have enough evidence of their existence, they must be the most abundant matter that exists, 85% of everything that has mass, leaving only 15% for our protons, neutrons, electrons, neutrinos, ... Being matter that does not interact with photons, neither absorbs them and heats up nor emits them and cools, it is matter that we cannot or it is very difficult to detect with electromagnetic radiation, we do not see it , is "dark matter" pata negra, our precise definition for astrophysicists. It could be classified as matter "from a distant place and perceived as very different from its own", it would be exotic dark matter according to the RAE.

Our only problem, quite big is true, is that we have not managed to isolate any WIMP in a laboratory , and we have tried . And that is why this type of material is "strange, shocking, extravagant", another of the meanings of exotic. Either we have been very wrong or we have not yet been able to detect it, which is not unthinkable because we are looking for something that does not interact almost with normal matter or with photons and we are doing it precisely with instruments based on normal matter and photons. It's like trying to catch water with a tennis racket. Whatever the answer, whether WIMPs exist or not, it will mean a great scientific discovery when we find it, we will know better what material most of the universe is made of.

Pablo G. Pérez González is a researcher at the Center for Astrobiology, dependent on the Higher Council for Scientific Research and the National Institute of Aerospace Technology (CAB / CSIC-INTA)

Vacío Cósmico is a section in which our knowledge is presented about the universe in a qualitative and quantitative way. It is intended to explain the importance of understanding the cosmos not only from a scientific point of view but also from a philosophical, social and economic point of view. The name “cosmic vacuum” refers to the fact that the universe is and is, for the most part, empty, with less than 1 atom per cubic meter, despite the fact that in our environment, paradoxically, there are quintillion atoms per meter cubic, which invites us to reflect on our existence and the presence of life in the universe.