The milder the coronavirus infection, the worse the smell 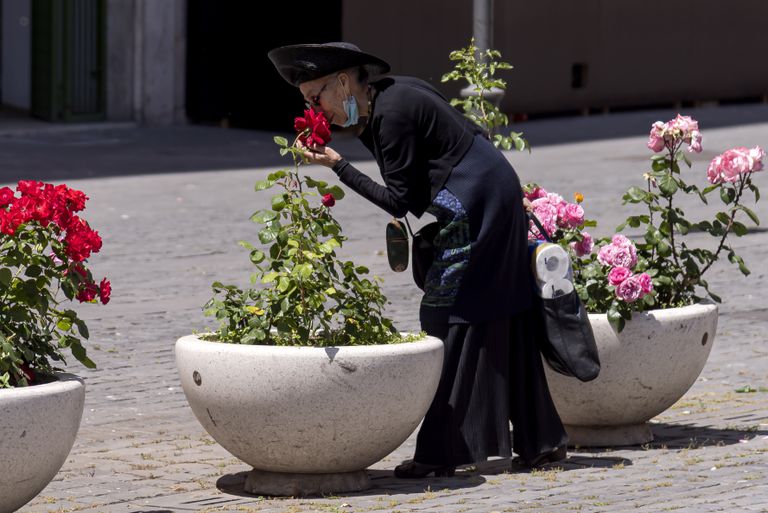 A woman lowers her mask to smell some roses in Rome, last May, in full confinement.Stefano Montesi - Corbis / Corbis via Getty Images

Anosmia, cacosmia, hyposmia, dysgeusia, parosmia, phantosmia ... are some of the names that refer to some smell or taste disorder. All or almost all of them are among the most frequent symptoms in coronavirus patients . Now a study also shows that there is a relationship between the severity of Covid and these smell problems: the milder the disease, the worse it smells. The good news is that, in most cases, odor distortion disappears within six months.

A group of scientists and doctors has studied the alteration of smell in almost 2,600 patients treated or admitted to 18 European hospitals. They have followed them from the onset of the first symptoms to beyond six months. The vast majority were mild that did not require hospitalization, but the sample also includes a hundred moderate cases and another almost three hundred between severe and critical.

The results of the study, published in the Journal of Internal Medicine , indicate that 74.2 % of those analyzed had anosmia or hyposmia (total or partial loss of smell, respectively). This percentage places olfactory dysfunction as the most prevalent symptom, ahead of the typical respiratory symptoms caused by the coronavirus: cough, shortness of breath or fever, present in 40% -50% of cases

As the authors themselves recognize From the research, there is a high risk of bias: a study done by otolaryngologists to analyze anosmia among volunteers probably causes the sample to be distorted in favor of those with olfactory problems. Still, work and previous surveys confirm that the problem to smell properly between three symptoms are more habituales.

While almost 90% of the mild suffered from anosmia, only 6.9% of the severe or critical had smell problems

But the most novel thing about this work is the connection between the degree of severity of Covid and the extent of the olfactory distortion. While in mild cases, anosmia and the like was present in 85.9% of them, neither moderate, severe nor critical cases exceeded 7% .

“It's like a natural mark to recognize the virus signature . When you check the prevalence of olfactory dysfunction among all groups with respect to severity, it can be observed that in serious or critical patients, it occurs in only 10% of cases ", says the researcher from the University of Mons (Belgium ) and co-author of the study Jérome Lechien.

The results of this work are reinforced because it is the first in which at least part of the sample had to undergo a series of objective tests to measure their degree of anosmia and the characteristics of the disorder. Until now, previous works were based on what the interviewees said. His perception of the loss of smell was subjective. But a subsample, around 10% of the total, were subjected to a test in which they had to smell 16 swabs with different odors and intensities. The goal was to have an identical test for everyone that would remove most of the subjectivity. According to Lechien, “the patients in the questionnaire tended to overestimate their olfactory disorder.”

Among the anosmics, more than half also had problems with the sense of taste (dysgeusia), especially with the four basic flavors. Almost 1,000 of the study participants suffered from cacosmia, an alteration of smell that results in smelling bad what once smelled good, like perfume. Two out of ten suffered from phantosmia, perceiving non-existent odors, ghosts.

"These alterations may have a physical cause or may be secondary to a neurological disorder," says the otolaryngologist and researcher at the Donostia University Hospital and study co-author Carlos Miguel Chiesa. The two main olfactory hallucinations, helcosmia and phantosmia, can occur at the same time. As Chiesa explains, "patients who have suffered an alteration of smell after suffering COVID-19 may present both symptoms, either in relation to the inflammatory process at the level of the olfactory bulb or as part of the nervous recovery process." That is, they could be a symptom of the disease or a proof of the recovery process.

The follow-up of all these cases allows us to conclude that the problems to smell remit in most of them. In fact, within a month of appearing as a symptom, more than half of the patients had already recovered their sense of smell. Only 4.7% of those studied continued with olfactory problems after six months.

"It can persist weeks, even months, but most patients experience improvement, which can be very slow," says the neurologist and member of the Spanish Society of Neurology (SEN) David García Azorín, who was not involved in this study. According to García Azorín, the explanation for this rhythm would be that “when there is damage to a nerve, the regeneration of the nerve occurs at a very slow speed, at one millimeter every day-week (depending on the nerve).”

Los The authors of the research have not studied why the mild ones smell worse than the serious ones, but they mention in their conclusions a hypothesis already raised in previous works. In many of these first cases, the lightness is due to the fact that the virus does not pass from the nose, the coronavirus is primed, so to speak, with the nasal mucosa, in particular the olfactory one. There is another possibility that they do not rule out: that the grave and critics were not in a position to assess their smell.