The threats of humanity's last frontier on Earth 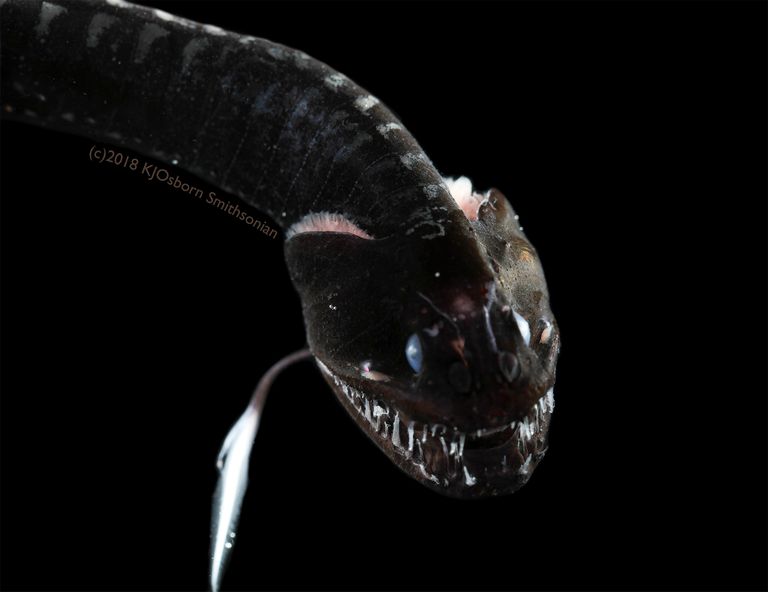 Specimen of 'Idiacanthus antrostomus', one of the species that inhabit between 200 and 1,000 meters of depth in the Pacific.KAREN OSBORN / SMITHSONIAN / Reuters

Where the light of the sun does not reach the kingdom of the giant squid begins, from families of jellyfish, bacteria or fish of mysterious biology . It is the new frontier of humanity on Earth, an area called the Twilight Zone (twilight zone) and which occupies the strip of the sea located between 200 and 1,000 meters deep. There, at pressures of 100 atmospheres (one hundred times higher than that at sea level), live between 1,000 and 20,000 million tons of fish, an amount equal to or 20 times higher than that existing in surface areas. Furthermore, this region is the key exchanger for carbon dioxide and the organic matter transformation chain. Without this dark realm, life would not exist. And yet it is threatened. International scientists grouped in JETZON (Joint Network for Exploration of the Twilight Zone of the Oceans) have sounded the alarm. "There is no time to lose. We cannot allow global warming and human exploitation to fundamentally alter the twilight zone before we begin to understand the possible consequences for the health of the planet ", they state in an article in Nature .

" This is the last wild resource on the planet " , warns Xabier Irigoien, scientific director of the Azti Basque technology center and main promoter of the latest study and others published on the twilight zone . In this huge strip of sea, which accounts for 60% of the planet's surface, the largest migratory movement on Earth takes place, from where millions of fish and organisms move to surface areas every night to feed and withdraw at dawn. This vertical movement of all kinds of elements, reflected in Scientific Reports of Nature , is key in the active transport of carbon, in a process known as "biological pump", in the contribution of organic compounds, generated by the release of waste or by the death of specimens, and as a food resource for the most superficial species. “Some material transport processes that would take months, take place in hours”, explains Irigoien.

The biological pump is like a fundamental exchanger and now there is technology to investigate it and develop predictive models, to know what the consequences will be if it is altered María Villa, physicist at the University of Seville

"This biological pump is like a fundamental exchanger and now there is technology to investigate it and develop predictive models, to know what the consequences will be if it is altered", adds María Villa, a physicist at the University of Seville and member of the group of scientists which has raised the alarm.

Despite its importance, it is the least known area on the planet. “It is misunderstood, physically, biologically, geochemically and ecologically. Even the number of organisms that live there remains a mystery, much less their diversity and function ”, warn the scientists in Nature .

From this ignorance arises the puzzling evaluation of the concentration of biomass . While some studies equate it to that existing in the superficial zone, others consider that it could be 20 times higher and much higher than the weight of the world's human population.

Another difficulty that Villa points out is that in situ research is necessary , Since the transport of samples from an area with 100 atmospheres of pressure and dark to laboratories on the earth's surface significantly alters the conditions

Knowing the operation of this huge biological pump is crucial to analyze future oxygen levels or how the oxygen will be stored. long-term organic carbon or the effects of climate change

The ecosystem benefit of this area is very important and more valuable than its exploitation Xabier Irigoien, scientific director of the Basque technology center Azti

The Twilight Zone is a fundamental ecosystem and in a difficult balance. "Any alteration in just one of its elements affects the entire cycle," says Villa. "The ecosystem benefit of this area is very important and more valuable than its exploitation," adds Irigorien.

Despite these warnings, the supposed wealth of resources below 200 meters from the sea surface has aroused the interest of the industry to exploit it without yet knowing how it will respond to human pressure. The study gives an example of how the capture of abundant species in that area, such as the tooth or brush firefly (Sigmops elongatus), would eliminate many other animals in the process, reduce the resilience of the ecosystem and change the global cycles of nutrients and carbon. Similarly, mining the seabed could release waste in the region and, according to Villa, change the system of material exchange

The effects of the exploitation of areas closest to the surface have already generated widespread environmental damage in coastal regions, an example of the importance of research and policy setting to avoid a similar situation in unexplored territory. "A global agreement is necessary to manage it," claim the JETZON.

scientists. "The fact that they are international waters makes regulation difficult," admits Irigoien, but highlights examples, such as limitations to the exploitation of Antarctica, which can serve to protect the twilight zone

The center directed by the Basque scientist leads a European project, called Summer, which advocates the investigation of the real levels of the existing biomass below 200 meters, the value of the ecosystem service and the Possible management measures.