Benzema will not play against Atalanta 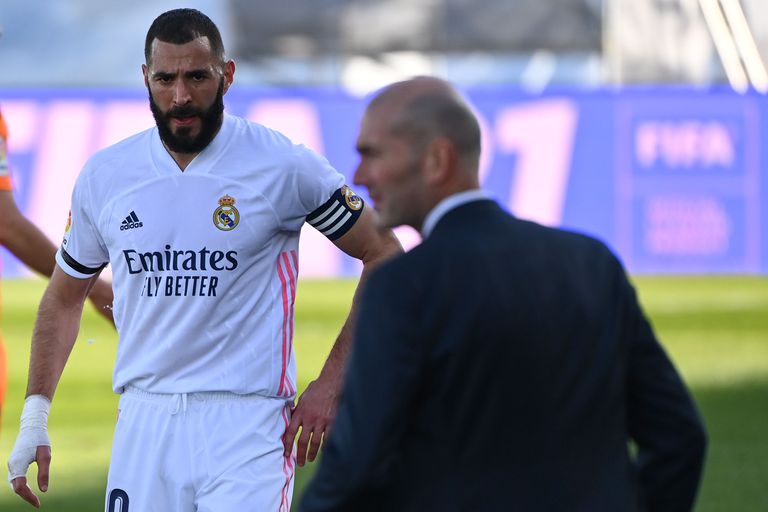 P Karim Benzema will not be this Wednesday in the first leg of the Champions League round of 16 against Atalanta. The Frenchman, who has some discomfort in the abductor of his left leg that prevented him from playing this Saturday in Valladolid, was not included in the call that will travel to Bergamo. Zinedine Zidane already warned two days ago in Zorrilla that he would not risk. “If it were a Champions League final or the last league game, it can. But there is a long season left , " said the white coach.

Actually, he does not recover any injured. The list for the European duel is exactly identical to that of the league engagement this past weekend. None of the nine footballers with physical problems (Ramos, Carvajal, Hazard, Militão, Odriozola, Valverde, Marcelo, Rodrygo and Benzema) are available for the appointment and the white coach called five homegrown players again: defenders Miguel and Chust, the Arribas and Blanco media, and the striker Hugo Duro. ZZ has only 11 first-team outfield players plus the three goalkeepers, just enough to set up an eleven with everyone in their usual positions.

📋✅ These are the 19 players called up for the match 🆚 @Atalanta_BC ! #UCL pic.twitter.com/3Sjbem33rL

Last Saturday , Mariano took Benzema's position, man by man, without altering the drawing. The line above was completed by Asensio and Vinicius. The result did not satisfy Zizou at all, who in the middle of the second half changed all three in one go. He took out Isco, Hugo Duro and Arribas, and changed the tactical disposition, with Casemiro as third center-back and two lanes (Lucas Vázquez and Mendy)

The meeting was one more example that, apart from the French, the offensive line cannot find the way to alleviate the team's scoring problems. Vinicius has not scored a goal since the end of October, against Shakhtar; Asensio does not finish leaving his broken line; and Mariano is shown many blocks from Benzema. The two who wait in the infirmary, Hazard and Rodrygo, have not brought Madrid out of poverty either when they have been healthy. The first because he has played little and lazy because of the four injuries this year; and the second because, despite his punctuality against the rival goal in several difficult moments, he has not had regularity either. Jovic, who could now have another opportunity, went to Eintracht in January with cobwebs in his accounting.

So, the average is the only one that seems capable of softening Benzema's absence, as seen in Valladolid. The Kroos-Casemiro connection got the whites out of trouble again and hooked the team to the League. Between the German (2), the Brazilian (6), Modric (4) and Valverde (3) accumulate 15 goals. This is the only float that the white team has been able to grab to cover the absence of the author of 30% of the goals this season (17 of 55) and who has participated in 40% of the targets, if they are taken into account All five assists

Since Cristiano Ronaldo left the club in 2018 and Benzema stayed in charge of attacking operations, the French forward has only missed one Champions League match. It was this season, in the tricky duel against Inter in Milan. That night Ramos and Casemiro were also missing and, despite the absences, the coin came out heads (0-2) .

She got the skills to kill!

Fernando Tejero: "I was reluctant to take medication, I couldn't believe that I had to take antidepressants"

An Instagram test has given us an idea of what a future might be like without the "like" counter, and some influencers believe it would be better for their business and their mental health.

Tools to give life or color to old photos: do they affect the privacy of our ancestors?

Sinovac begins distribution of 800 thousand vaccines against covid-19; it will be done throughout the country