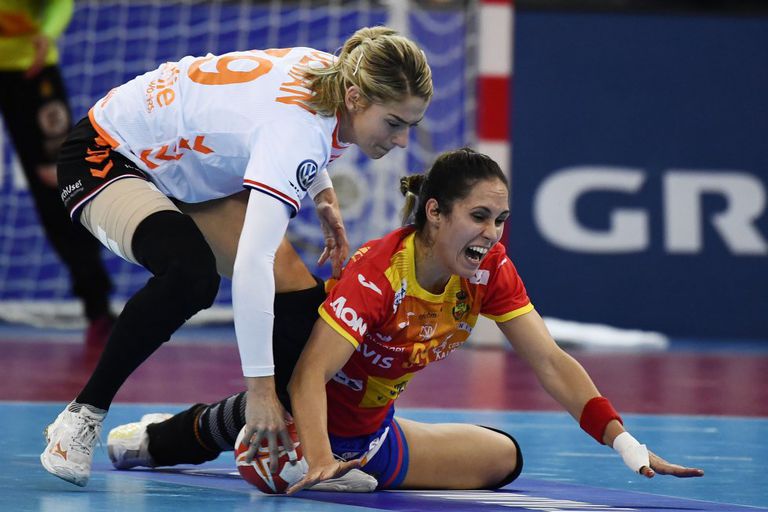 Polman (left) and Mireya González, in the Netherlands-Spain final of the last World Cup.

Until there were ten days left, the women's handball European Championship has not been absolutely certain that it will take place. The calls for all the teams were already published, and many of them had started training. Spain, for example, began its concentration on Monday. But the pandemic pushes everything to the limit. Finally, Denmark took over the tournament alone after the resignation to host it just a week ago from Norway due to the incidence of the coronavirus. In principle, these two countries were the organizers

The withdrawal of this country recently led to a succession of meetings at the highest level between sports and political authorities to find a solution because of the five initial venues between the two States had gone only to one. In extremis , Kolding joined Herning, and between them they will save the championship. The selection would not move from this second city from its beginning, on December 3, until a hypothetical end, on the 20th

. The news came about the bell. The world of handball was confident that the European would succeed, but there were no certainties. This case exemplifies the difficulties of holding large tournaments, with several venues and even countries, and in the midst of a tough second wave. Denmark accumulates 264 cases per 100,000 inhabitants in the last 14 days and Norway, 154. Much less than Spain, which rises to 485, according to data from the European Center for Disease Control.

The worsening of the health situation multiplied the problems around this event in recent weeks. Norway, before his final resignation, withdrew to Oslo and Stavanger, and continued only with Trondheim. And Denmark, which has now absorbed the solo championship, reported a few days ago that of its two initial cities (Herning and Frederikshaven) it only retained the first. In the end, there was no other solution but to incorporate Kolding to avoid greater evils.

With the logistical obstacle saved, in sports the team will start on December 3 against Russia trained by the Canarian Ambros Martín. Sweden and the Czech Republic are their other rivals in this first phase. The first three go to the second round, also in groups, and dragging the points achieved against the teams that remain in the championship. Spain, which plans to play a friendly tournament this coming weekend in Torrelavega, has not played a match since the final of the last World Cup against the Netherlands , last December, resolved in that cruel outcome: penalty with six seconds remaining for an infraction in the opposite area.

For this European, Viver's list maintains a continuity idea compared to a year ago despite the five changes. Captain Carmen Martín returns, injured then, instead of Maitane Etxeberria, recruited at the last minute in 2019. The team's top scorer in the World Cup, Shandy Barbosa, falls due to a serious injury to her left knee and enters Carmen Campos, the Top scorer in the French league with Dijon. And there is a double relief in the pivot position: Kaba Gassama and Lysa Tchaptchet travel in place of Eli Cesáreo (injured) and María Núñez. Goalkeeper Darly Zobqi is also out.