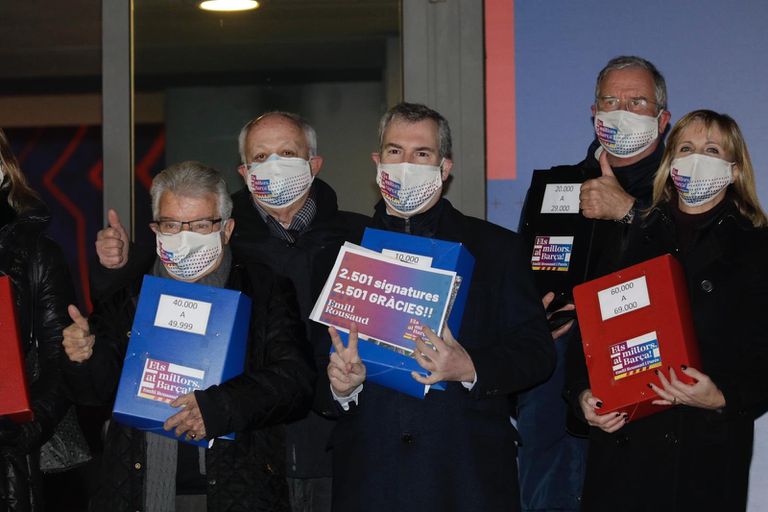 Emili Rousaud, the day he handed in with his team the signatures to be proclaimed candidate for the Barcelona elections. Illustrated Service (Automatic) / Europe Press

Emili Rousaud throws in the towel. The Els millors candidate , Barça withdraws from the electoral process for the presidency of FC Barcelona, claiming that he prefers to leave rather than contribute to feeding suspicions about possible “manipulations” in the electoral process. The race for the presidency of Barça thus remains with three candidates: Joan Laporta, Víctor Font and Toni Freixa. At the press conference where he announced his resignation, Rousaud has revealed last minute contacts to lock up a joint candidacy with Freixa. "For a matter of pure dignity we have said no," Rousaud settled, while admitting having come to study the possibility of uniting "three candidates" because it was the only way to have options to win an election that has Joan Laporta as favorite .

"We knew when we presented the signatures that we were very fair," he admitted, but tried to unlink his decision of forced abandonment for not reaching the minimum cutoff of support. The resignation of Rousaud had been chewing since the Electoral Board reviewed on Wednesday the 2,510 signatures submitted for his candidacy and reduced the valid supports obtained by Els millors, to Barça, to less than 2,000. 2,257 signatures are needed to become a candidate and Rousaud did not want to wait for the official validation of the dubious ballots.

In the tasks of filtering the endorsements of each candidate, a ballot of the candidate Agustí Benedito was discovered in the folders delivered by the team by Rousaud. The count and approval of the firms to avoid irregularities had become entangled after a candidate such as Jordi Farré denounced that there have been situations of buying and selling of firms. Rousaud defends the "absolute cleanliness" and "honesty" of his candidacy. On Wednesday he issued a statement denouncing that he felt he was the victim of a "dirty war" and suggested that a black hand had tried to boycott his candidacy by dynamiting the legitimacy of his endorsements.

"We suspect that we are victims of a dirty war where it does not matter that Els millors, let Barça participate in the electoral campaign ”. It is not the first time that whoever became vice president during the tenure of Josep Maria Bartomeu sows shadows of corruption in Barça. "Someone has put his hand in the box," said Rousaud in April of last year, in the middle of a storm for Barçagate . In recent days, the leader of the candidacy Els millors, Barça had led the criticism of the holding of the elections, claiming that with the current evolution of coronavirus infections “there is a large mass of partners who will not want to participate in the elections to protect your health. ”

The representatives of the Procicat (Pla Territorial de Protecció Civil de Catalunya) and Barça will meet this Friday to analyze the date and conditions of the Barça elections affected by covid-19. The lengthening of the current municipal confinement could cause the postponement or even the suspension of the elections due to the impossibility of all the summoned partners being able to mobilize and participate in the vote.