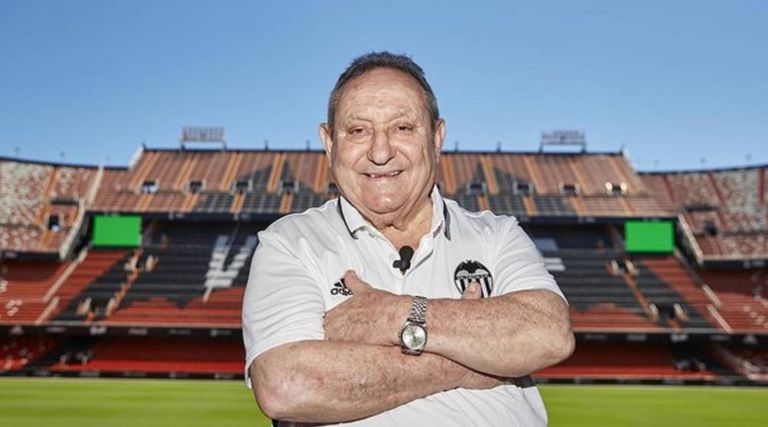 Bernardo España, a historic Valencia utility worker. Españeta's ashes will be scattered across the Mestalla lawn. Valencia will respect one of the last wishes of its iconic prop. At 82 years of age, Bernardo España Edo, Españeta (Valencia, 05/01/1938), died yesterday filling football gatherings and social networks with his catalog of anecdotes inside the dressing room. Españeta transcended his profession to place himself in the pantheon of the club's great characters. Friend of one generation of soccer players and father of another, he leaves endless memories and a great heart at the service of the Mestalla club. There has never been another employee so beloved. His friendship with Kempes, legend of the bat team, bequeaths different stories with which both of them were broken while having a beer. "I won him money with different bets," Bernardo said, laughing whenever he had the chance. Like that time when he signed a check imitating Kempes's signature and went into the bank to collect it. The Argentine, amused, was waiting outside in the street. If Bernardo managed to collect the money at the window, he would keep it, if he did not collect it, he would lose and risk the bank teller catching his attention. Españeta won that bet but never said the amount. His ability to mimic every player's signature was astonishing. Every day, after doing his job, he would stay, signing photos, jerseys and balls. Both the footballers and the club were spared many hours of signing. The bite was constant between El Matador and Españeta. So much so that they invented a game. In Mestalla, before each game, when the warm-up ended, the players returned the balls to the band for the utility to withdraw them. Then, Kempes, from the goal in which the shots on goal ended, threw the ball towards the entrance of the changing room tunnel where Españeta was waiting. The game consisted of controlling the ball. Bernardo won many times. “He gave me the ball high and screwed up, but I punctured him. Kempes lost a lot of money against me, ”he boasted. From his home in the United States, El Matador, who woke up to the sad news, mourned the loss of his loyal prop, his friend. “He had a bigger heart than Valencia. He was a great friend. Always predisposed to help ”, commented the Argentine star. Bernardo's technique drew the attention of everyone who stepped on Paterna's wardrobe for the first time. Another who was stunned by his juggling with the ball was Romario. The Brazilian and Españeta challenged each other to touch the ball when training in the sports city ended. The utility player always liked to hesitate to the footballers with his technique. “I played forward in my neighborhood team. I was not doing badly, but an accident with the Vespa took me away. I was riding a motorcycle with my brother through the Alameda, we slipped in an oil stain and in the fall I destroyed my tibia, fibula and I don't know how many other things ”, he explained. Españeta entered Valencia shortly after that accident. In the 1956-57 season, at the age of 18, he became the ball boy of the subsidiary, the Mestalla, coached by Carlos Iturraspe. In a short time he rose to the first team. His dedication and sympathy opened all doors for him. In the dressing room the players nicknamed him Españeta because of his short stature. Soon he would win them all. One of the most closely linked to the utility was Ricardo Arias. They lived off everything for 16 seasons. “His wife, Charo, has called me to break the news. It is a loss that we are going to suffer, feel and suffer; if people wanted it, we adored it, ”says Arias. An admirer of Di Stéfano, “because he made me a man”, and of Fernando Gómez, “the most complete player who has passed through Valencia”, Bernardo Spain retired in 2003 but continued to go to the sports city every day to help . In 2014 he received the club's gold and diamond insignia. He finally retired in August 2016, 60 years after entering the club. Mestalla will always remember you.

The president and owner of Samsung dies

There are more than 10 thousand suspected cases of covid-19 in Puebla: Ssa