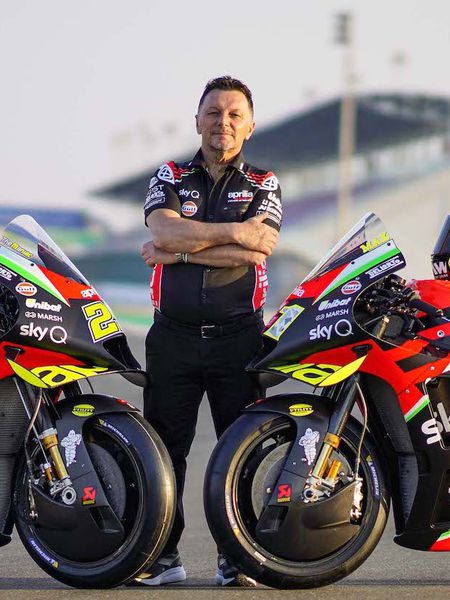 Former Italian driver Fausto Gresini , director of the MotoGP Gresini Racing team, died this Tuesday at the age of 60 at the Maggiore hospital in Bologna as a result of a coronavirus infection that He kept him in bed for almost two months. “This is the news that we never wanted to give and that unfortunately we are forced to share with all of you. After almost two months fighting against the covid, Fausto Gresini has passed away a few days after turning 60 ″, indicated the team through a statement issued by social networks.

Born in Imola in 1961, Gresini, one of the most important characters popular of the paddock of the Motorcycle World Championship, former racer, sports director and discoverer of young talents, had been hospitalized in Bologna since last December due to severe respiratory failure. He had entered critical condition in recent days, as reported by the health center on February 18.

The two-time 125cc world champion had tested positive for covid-19 shortly before the Christmas holidays and, after spending a period initial isolation at home, he was admitted to the Santa Maria della Scaletta hospital in Imola on December 27.

A few days later he was transferred to the Maggiore Carlo Alberto Pizzardi specialized center, in Bologna, where he was admitted to the Intensive Care Unit with levels very low oxygen saturation in the blood. He was inducted into a drug coma and underwent endotracheal intubation to aid oxygenation of his organs, as reported at the time.

couldn't get over it.

Gresini was one of those petite riders who reigned in the 125cc class at a time when that small categories had an entity of their own. A benchmark of 125cc in the eighties, when he achieved two world titles (in 1985 and 1987), he was then a tough rival for Luca Cadalora or for a very young Loris Capirossi when, already in the nineties, he was racing a Honda after racing with Aprilia.

The news we would have never wanted to give, and that unfortunately we are forced to share with all of you. After nearly two months battling against Covid, Fausto Gresini has sadly passed away, few days after turning 60. #CiaoFausto ❤️ pic.twitter.com/mHMsDgunmb

In 1995, Fausto left the motorcycle but not the motorcycles. He remained in the paddock . Passionate, he made his debut at the helm of Alex Barros' team in the 500cc, with a Honda. It was the start of a long career as a sports director. Fausto knew how to shape the character of young talents. He did it shortly after with his former partner, Capirossi. He also worked with the ill-fated Daijiro Kato and Marco Simoncelli , whose fatal accidents he faced with the integrity of those who know the dangers of running at 300 km / h.

In 2015 he accepted, delighted, Aprilia's call that He was chosen to guide the Italian factory project on its return to MotoGP while the Gresini team, founded in 1997, continued to triumph in the small categories of the World Championship, Moto3 and Moto2. With him, with whom Toni Elías had become the first Moto2 champion in 2010, Jorge Martín was also Moto3 world champion in 2018. The last title for Gresini's structure was the MotoE World Championship that Matteo won. Ferrari in 2019.

Yesterday the worst awaited me and today it has arrived ... I will always take you with me on the motorcycle! Rest in peace my friend🙏🏽 pic.twitter.com/Bc1O2j8Owr