Griezmann: "Deschamps knows where to put me" 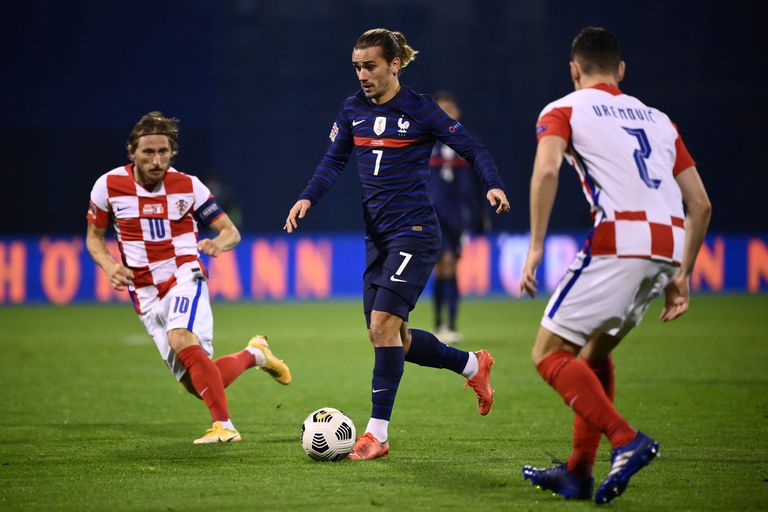 Antoine Griezmann dribbles the ball in France's Nations League game against Croatia.FRANCK FIFE / AFP Mendy started down the right wing to hit the baseline and delivered a cross that the Croatian defense could repel in the first instance. But the ball came to Antoine Griezmann (Mâcon, France, 29 years old) , who put it to sleep between his feet to unleash a cross blow that removed the splinters from the crosshead before finishing in a goal. "One of my most beautiful goals," acknowledged the attacker bleu after the match; “The ball came to me and I tried to hit it well and scored. I feel good about the goal. Deschamps he knows where to put me, so I took advantage of this advantageous situation and the confidence of the coach and my teammates ”. Quite a dart for Ronald Koeman , Barcelona coach who insists on putting him on the edge (as Valverde and Setién also did), when he always played on the inside. And also a message for his colleagues, who do not usually attend to him in his break-ins or in depth. A statement, in short, daring. There is a Koeman maxim as a coach that he slides whenever he can when they question him about Coutinho's refreshing performance after his first grayish step at the Camp Nou. "One of my functions is to bring out the best in the players and that begins with putting each one in their place," the Dutchman resolves with his usual phlegm. And this is how he puts it into practice with the Carioca as well as with the rest of the players except for Griezmann, who continues to be screwed in a band, throwing off-marks without being seen, working beautifully in defense and appearing sporadically in the choral game of Barcelona, stuck with the trigger. He also doesn't get away with it when Alba walks through the band and he pulls in. He adds 184 minutes in the League and has not made any target - far from the three of Ansu, the other end -, neither successful in the pass because he does not have any assistance, for the two of Messi and Coutinho, and one of Ansu. And what occasions to celebrate has. "Because of his quality, he had to have scored one of the two he had," said Koeman after the match against Sevilla, a spicy message from a coach who does not mince words. The words did not seem to sit well with Griezmann, who responded first on the table with the goal against Croatia - it served him to position himself as the fifth historical scorer of the selection (33 goals), only behind Henry (51), Giroud (42 ), Platini (41) and Trezeguet (34) - and then before the micros. The problem is that for Griezmann his position is false, a position in which Messi and Coutinho have alternated to date. And, as Barcelona plays, more to the touch than to the auction, it is difficult for the Frenchman to join playmaker or second striker, anonymous on many occasions within the Barça associative game. It is not, however, the only complaint of the attacker since he put on the Barcelona coat, as he already warned that he did not know how to haggle - a mandatory condition for a winger - while his agents or family have also expressed their disappointment on social networks when it does not appear in the eleven headline. He has not gained too many complicities in the Griezmann dressing room, which they consider a bit childish, and neither does he with the coaches, who invariably compliment him on his effort when he always stood out for his marksmanship. He claims to play on his site, which Koeman boasts. Now, the technician has the floor and above all the decision making.