Hezonja leaves the NBA for Panathinaikos with the approval of Barca 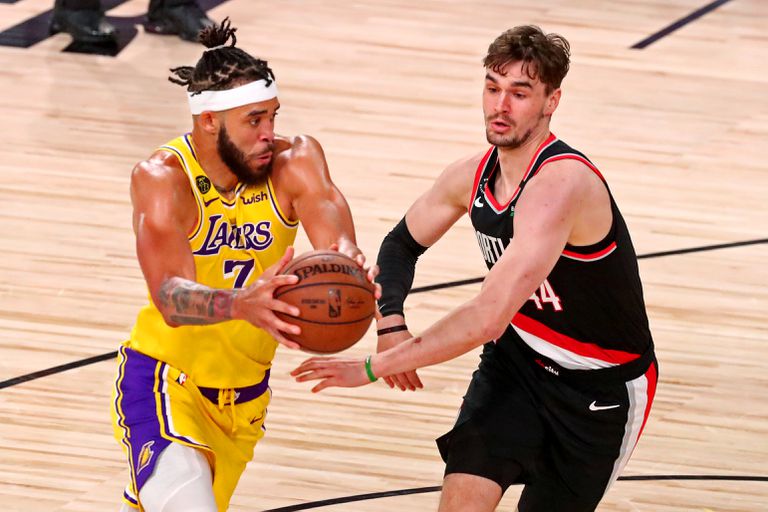 Hezonja tries to stop McGee at a Lakers-Portland in August 2020.Kim Klement / Reuters

Mario Hezonja is added to the list of players returning from the NBA after having signed for Panathinaikos for the remainder of the season. The Croatian forward, 2.03 meters and turning 26 years old, was chosen this Thursday, he was chosen by the Orlando Magic in fifth place in the 2015 draft. Then he reached an agreement to terminate the contract that linked him to Barça. The termination clause was for two million euros, but they reached an agreement whereby it was lowered to 1.6 million and, in exchange, the club kept its rights to play in Europe. The Barcelona club has now given its approval for Hezonja to be able to join Panathinaikos, but it will keep the player's rights in Europe.

Barça signed Hezonja in 2012. After playing in the subsidiary team, he made his debut in the ACB in April 2013. He demonstrated his potential with some outstanding performances, especially one in a classic against Real Madrid in which April 2015 in who scored five triples. But his game was very irregular. With 20 years he bet on the NBA. He signed a contract with Orlando for three years and almost $ 11.7 million. He did not quite settle in the Florida team, although in his third year there he started 30 games of the 75 games he played and obtained his best scoring average, almost 9.6 points, in addition to 3.7 rebounds and 1.4 assists. In July 2018, he signed for the New York Knicks with a contract of 6.5 million dollars. A year later he signed for 1.8 million with Portland. In November 2020 he was transferred to Memphis, but a month later he was cut off.

Hezonja arrives at Panathinaikos, which is trying to qualify for the quarterfinals of the Euroleague, although it is far from that goal because it is in 15th place in the table with 9 victories in 23 games, five wins less than Anadolu Efes, which occupies the eighth and last place in the classification.