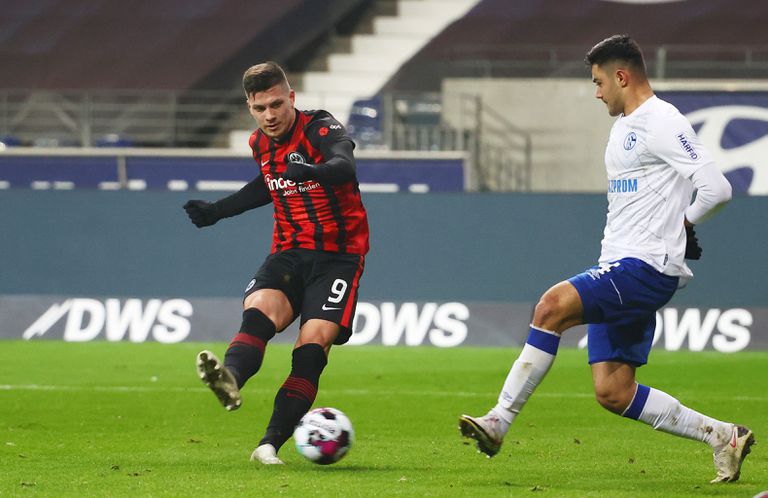 Jovic scores his second goal against Schalke 04 this Sunday in Frankfurt.KAI PFAFFENBACH / Reuters

Luka Jovic has returned in a big way to Eintracht Frankfurt, a club he left a year and a half ago to join Real Madrid in exchange for 60 million. The 23-year-old forward, on loan in this winter market, has re-debuted with two goals coming off the bench to give his team the victory against Schalke 04 (3-1). In just 28 minutes, the Serbian has equaled the goalscoring mark he achieved in 32 games with Real Madrid. 1,047 minutes in which he fired 28 shots, seven between the sticks. This season, he had played five games with Zidane's, starting in the starting lineup three times, but without scoring a goal.

“I feel great and I'm more than happy to be back at the club that gave me so much. It will be an honor for me to wear the Eintracht shirt in the coming months ”, declared the player on his return to the Bundesliga, just three days ago. With so little time with the team, the coach, Adi Hütter, outlined to keep him on the bench but decided to give him entry in the 62nd minute with the score tied and his team away from the Schalke area. 10 minutes after stepping on the pitch, the Serbian celebrated his first goal after taking advantage of a death pass in the area. His first league goal since February 9, 2020, when he last scored for Madrid in the Whites' win over Osasuna. The second came at the last minute, to sentence the game, after cutting in the area and shooting at the near post.

With the German club, Jovic showed his best level in the 2018-19 season, just before signing for Madrid . The Serbian scored 17 goals in the Bundesliga, but stood out for his performance in the Europa League, in which he scored 10 goals to lead his team to the semi-finals of the tournament. After a turbulent time at Benfica and Madrid, the forward seeks to regain his best level to earn a return to the team to which he still belongs. “There is no doubt that I evolved as a player at Real Madrid. I've had a year and a half without playing regularly and I'm going to need some time to pick up my pace. In Spain I was with the best in the world and I am optimistic that everything will turn out well ”, declared Jovic about this new stage that, for now, is starting off on the right foot.