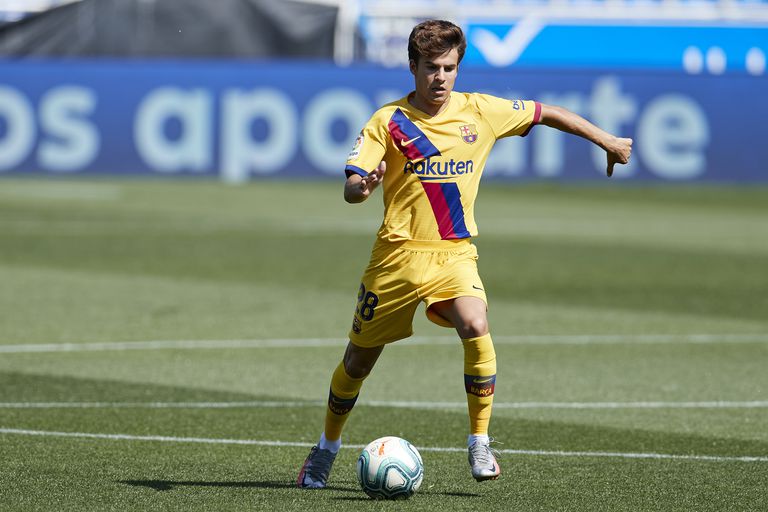 Riqui Puig, in Barcelona's game against Alavés Ion Alcoba Beitia / GTRES Riqui Puig (Matadepera, Barcelona; 21 years old) , a 1.69-meter youth squad called to colonize the Camp Nou with his aesthetic and cerebral football, does not enter into Ronald Koeman's plans. This was communicated by the Dutch coach at the Barcelona wheel, that this season he was no longer going to be part of the subsidiary: either he would earn his place in the first team or he was looking for a team to continue growing. You will have the second option. You have until October 5, when the market closes. Riqui Puig participated in the two Barça friendlies in the preseason, played 45 minutes against Nàstic and half an hour against Girona, but was left out of the Gamper squad. He did not convince the new Barcelona coach, as he had not done with Ernesto Valverde and Quique Setién When he was still playing for Juvenil A, Riqui Puig made his debut for Barça B in 2018. He played three games in the subsidiary and was crowned in the Youth League. In the following campaign, 2018-2019, he settled in the Miniestadi. Ernesto Valverde, at that time in charge of the Camp Nou, took him to the first team preseason to the United States. And, a few months later, at Barça's premiere in the Copa del Rey, he played his first official match against Cultural Leonesa. The youth squad, who returned to the preseason with Valverde, expected to make the leap to Camp Nou at the end of the season, but had to stay in the subsidiary. Txingurri already had too many flyers and Puig did not even finish emerging at Barça B: no goals and seven assists in Segunda B. Valverde only gave him three games in the first team. Meanwhile, he tried to return the subsidiary to Second A. In November he complained about the treatment he received from rivals. “Sometimes they go after me. I do not know if it is a matter of the club or the Federation, but something they must do because one day I will end up injured, "he said. A month later he threatened to leave Barça. “At no time has Riqui told me that he wants to go out. The important thing for him is that we work here the same as the first team: the same dynamics, the same schedules ... He has to work with us every day, play good games, show his level and be the best, just like everyone else " , explained, then, García Pimienta, coach of the Barça subsidiary. A few days later, after the elimination of Barcelona in the semifinal of the Spanish Super Cup, Josep Maria Bartomeu fired Valverde. “The players from the quarry will come to train with us and they will participate. This must be clear to the first team. If the talent below makes its way, it is because it deserves it. It is a message to those below. If they really progress and earn it, they can play perfectly in the first team and be one more ”, announced Quique Setién, substitute for Txingurri. Puig thanked him in public: "Setién is a very close coach, I am very happy." The Cantabrian called him up for 15 games in LaLiga and played in 11. He did not score and only gave two assists in the last game against Alavés, when the title was already resting in Madrid. While Barça was preparing for the Champions League, the subsidiary was playing for promotion to Second A in Marbella. Setién had three Barça B players: Araújo, Puig and Ansu Fati. The center-back traveled to Andalusia with his teammates, Fati told Pimienta that if he needed him, he would go, but Puig refused. "I have to be fine for the Champions League," he argued. He did not play against Naples or Bayern. “Ansu is quiet, respectful and trains very well. That is why he won the affection of the entire first team dressing room. With Riqui, the opposite happens ”, they explain in the Sports City. In Koeman's 4-2-3-1 system, Riqui Puig does not enter either as a pivot or as a playmaker. Without the love of the squad or the endorsement of Koeman, Puig, with a contract until 2021 (with the option of extending it for two more seasons), will have to find a new destination away from the Camp Nou.

Adele, criticized for a parody on sex tourism in Africa

5 steps to enter for the MXN 2.4 billion Powerball jackpot, until this Wednesday, October 28

NASA confirms there is water on the Moon

The story of Dolores Cacuango, the activist honored by Google with her doodle