Lakers tie LeBron until 2023 and Westbrook trades Rockets for Wizards 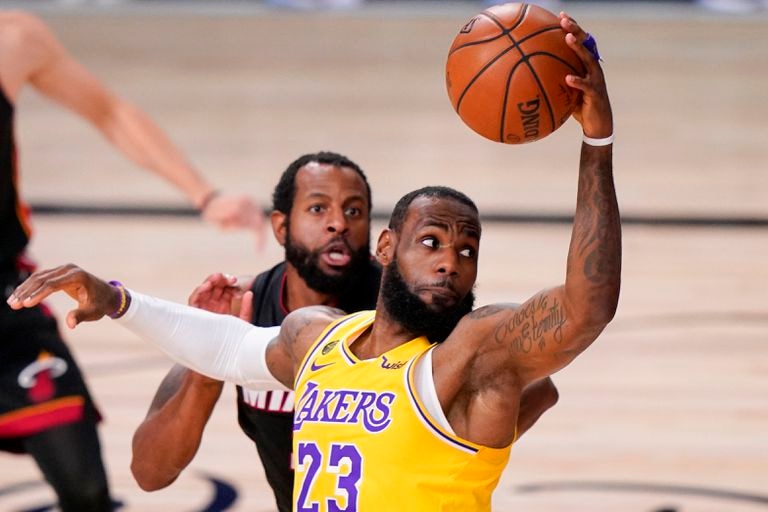 LeBron James and Iguodala, in the Lakers-Miami finals. Mark J. Terrill / A

P The Lakers have reached an agreement with LeBron James to extend his contract for two more years, until the 2022-2023 season. The NBA star, who turns 36 on December 30, will receive 85 million dollars, about 70 million euros, in those two years, an amount similar to what he had been receiving since he signed his current contract in July 2018.

The Lakers, led by LeBron, MVP of the finals, won the title in October, the 17th in their history. Now they are the ones who add the most together with the Celtics. LeBron, who has four titles - he won two with Miami and one with Cleveland - averaged 27.6 points, 10.8 rebounds and 8.8 assists in the playoffs that were played in the Disney World bubble, Orlando.

The Lakers are negotiating now a new contract with Anthony Davis, who is in free agent status. The team led by Frank Vogel has been renewed with the hiring of Marc Gasol, Montrezl Harrell, Dennis Schröder and Wesley Mathews. Dwight Howard, Rajon Rondo, McGee, Danny Green and Avery Bradley have left the team. The Lakers are once again among the favorites for the title and will open the season on Christmas Day against the Dallas Mavericks of Luka Doncic.

The transfer market has been rekindled with the agreement that Houston and Washington have reached to exchange their bases. Russell Westbrook will play next season with the Wizards and John Wall with the Rockets. The Wizards have included first-round picking rights in the 2023 draft in the deal.

OFFICIAL: The Houston Rockets have acquired John Wall and a future first round pick from Washington in exchange for Russell Westbrook.Full Story: https://t.co/YApgYlopzJ pic.twitter.com/XTRprcdV6p

The two teams hope to keep their figures in their squads. James Harden has asked the Rockets to trade him and Bradley Beal has also signaled his intention to leave the Wizards.

Westbrook, 32, has a three-year contract totaling $ 133 million. He has been an All Star in nine of the last ten seasons. He was traded by Oklahoma City to Houston in July 2019. This season in the Rockets he has averaged 27.2 points, 7.9 points and 7 assists. He started the season late because of a knee injury, he joined the Disney World bubble late because he tested positive for covid-19 and was injured again. He missed four games in the first round of the playoffs, precisely against his former team, the Oklahoma Thunder. He recovered, but the Rockets lost in the Western semifinals to the Lakers (4-1).

John Wall, 30, has not played since December 26, 2018 and missed two seasons due to Achilles tendon injuries and the knee. He has a contract in force for three years and 132 million dollars.