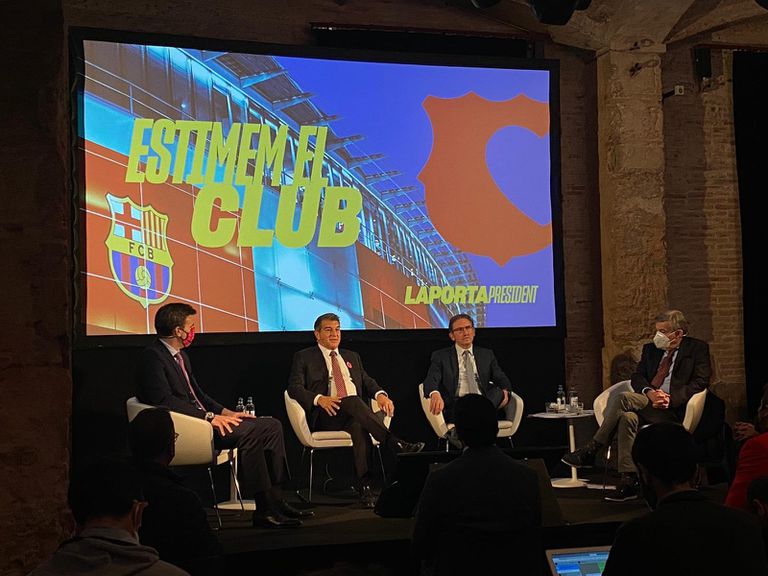 Joan Laporta, in one of the first acts of 'Estimem el Barça' still in pre-campaign Illustrated Service (Automatic) / Europa Press

At the age of 58, Joan Laporta was scheduled to become president of Barcelona again and was ready to take office next Sunday 24 in the elections that were finally postponed due to the health situation caused by the covid. The 9,625 validated signatures placed him as the favorite candidate against Víctor Font and Toni Freixa until the elections were postponed to March 7 . The change of date has not changed the speech of an applicant whose main concern is that they do not get a goal after lengthening a match that dominates with an advantage on the scoreboard

Laporta has sent a letter to the Management Commission, chaired by Carles Tusquets , to demand guarantees on the open electoral process after the vote has been delayed seven weeks due to covid-19. "I want its purity to be ensured and explained very well so that there are no doubts and any challenge that may alter the call is avoided," he argues. “I aspire for the manager to commit, specify the date, the conditions and organize herself well so as not to vitiate the electoral process. They assure me that they have a legal report from a recognized professor - Maresca Law Firm - which makes it explicit that there will be no objections. There is also a second report from the medical authorities that endorses it. We will see ”, insists Laporta.

A few hours later, the Generalitat explained at noon this Tuesday that it has approved a Decree Law by which certain aspects of the legal regime of sports entities in Catalonia are modified. The approved decree, explained the councilor spokesperson Meritxell Budó, "specifically enables voting by postal mail and electronic voting in the election processes of the boards of directors and of the presidents of sports entities in Catalonia", which could facilitate the development of the elections in the Barça club.

The former president of Barcelona had said he was in favor of voting by mail, and of telematic voting, “and that the legal conditions be provided so that members can vote by mail this time postcard, ”he said. "But I reiterate: I do not want to open the way to challenges," he insisted. "In 2003, they already sneaked it to me when eight days in office were counted as one year by the date of taking office, a circumstance that meant carrying the accounts of the board of Joan Gaspart".

The favorite of the The elections on March 7 , he said, he complied because he had "no choice", a postponement that in his opinion goes against the interests of Barcelona. "They made me a three against one," he says in reference to the manager and the candidacies of Font and Freixa. “The function of the manager is to call elections and, if they had wanted, they could have been held on the 24th. There was a way to apply the necessary health and participation measures for voting. It reached the certificate of self-responsibility of the Generalitat in terms of mobility, but it lacked courage ", he concludes, after feeling" victim of political interests and of the manager. " The argument serves to express its independence from any political, media and economic group. "I am disconnected from politics."

"We have lost the opportunity to start reversing the situation at Barça right now," Laporta finishes. “Messi is slipping away from us and market opportunities are also escaping us. You have to control expenses, decide investments, avoid mismanagement ”. The former president spoke out precisely against signing Eric García now because the club's critical economy does not allow him to be incorporated from Manchester City. Laporta calculates his steps very well so as not to change the prognosis of the elections. “I can't trust myself” .

And what a vacation it was!

Laura Pausini's emotion before the Golden Globes: "All this surpasses the dreams she had"

Euridice Cabanes: "The mobile phone is a spying technology that we carry everywhere"

Green passports are not operational; sanctions are the decision of each country: PAHO