Oliveira, a dentist who sweeps Portimao with his second MotoGP victory 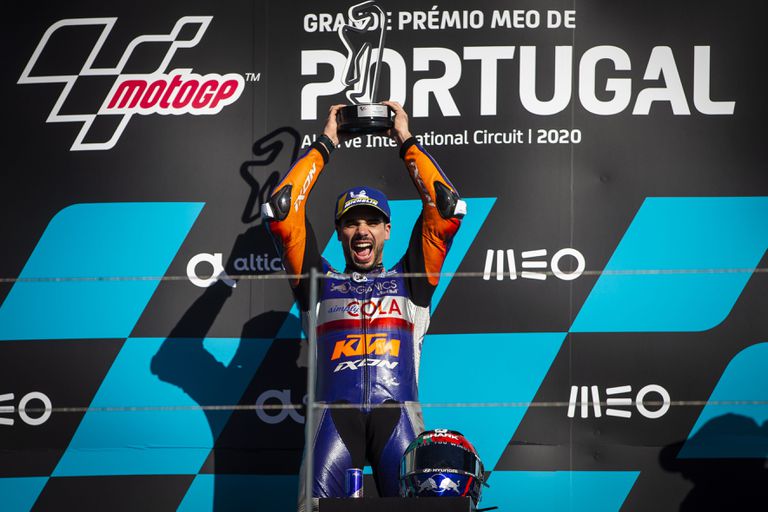 Oliveira (Almada, Portugal; 25 years old) likes to be addressed by his full name, Miguel Ángel. He is serious, sensitive and so responsible that he took to heart that of carving out a future in case the motorcycles did not turn out as well as, on the other hand, it seemed - his name has resonated in the paddock since he was a teenager -, thus who finished dentistry and when he is not on the grand prize, he visits his clinic. His personal story is almost as romantic as the sports one. After a long (and at times, secret) relationship with his stepsister - his father married a second nuptials - the wedding awaits him just around the corner. Meanwhile, the boy has taken advantage of this strange year, marked by the pandemic, to confirm that his enormous talent well deserved a place in MotoGP.

After an unexpected triumph in Styria with a satellite KTM , the Portuguese pulled from memory to evoke with a majestic ride the successes he reaped as a child on this Algarve International Circuit to close the year with another victory, in addition to pole position and the fastest lap of the race. A complete in the last race of the year and a few kilometers from home on the return of the competition to Portuguese lands. Couldn't ask for more. His tears spoke for him at the end of the test, a race that evidenced many of the keys to a different, short and intense season, in which the world champion, Joan Mir, won only one race on the handlebars of a Suzuki, although the title Ducati took it from manufacturers - the first since 2007, with Stoner - thanks to the good work of an outsider like Jack Miller, and Yamaha was the factory that accumulated the most victories (seven) despite living a year to forget. And from which to learn, too.

The rivals could not do anything to prevent Oliveira's victory, who in three laps already took almost two seconds off Morbidelli. A distance that only increased as the laps went by on this circuit that is like a roller coaster: with multiple ups and downs, the front wheel in the air at the exit of Turn Eight, linked turns and grade changes . A wide and fast track that amuses the viewer more than the one who walks it. Although it could well be said that this Sunday Oliveira enjoyed it as much as the spectators who, although the stands were empty, attended the show from their homes.

And since Miguel Ángel was in other wars, the analysts looked for more fronts. Like the one that Morbidelli fought, who played with Rins the runner-up of the world championship. And he won it, in part also because Rins sore his shoulder after a hard fall on Friday and couldn't handle such a physical run. The 21 was the best Yamaha, again. Third in Portimao after a magnificent race in which he only gave in to Miller's conviction and daring on the last lap, when the Australian was able to make up for himself (one overtaking, and another, and another to almost win over the finish line) of that second place that the Italian-Brazilian already denied him a week ago in Valencia

The tremendous effort, the accumulated stress, the long weeks away from home, the days of confinement before and even during this world championship were rewarded by a great prize of emotions on the surface in which three pilots of satellite teams, all of them 25 years old, took the podium, confirming the revolution of a new generation that aspires to stand up to Márquez when he returns , as expected , in 2021. It was a Sunday of celebrations, but also of farewells: those of Cal Crutchlow, who is retiring, or Andrea Dovizioso (sixth in Portimao), who takes a year off and nobody knows if he will be seen again. win a grand prize. Also said goodbye to Yamaha's Valentino Rossi , a goodbye that ends one of the longest-standing relationships in the paddock ; and Pol Espargaró (fourth) from KTM, the brand that has grown the most since its arrival in the championship in 2017.

🇵🇹 @ _moliveira88 flies the flag with pride! Emotion everywhere you look at KTM as @polespargaro waves goodbye to the team! 👋 #PortugueseGP 🇵🇹 pic.twitter.com/T7HJBpHDhe

And as they had already celebrated it all a week ago, with the surprising world title of Joan Mir , Suzuki this Sunday was left without much prize: Rins affected (15th) by a bad choice of tires, and weighed down the brand new champion by a bad position at the start due to an electronic problem that, after a touch in the middle of a comeback attempt, forced him to abandon. They have, however, still much to celebrate. Not so Yamaha. The three drivers with an official M1 finished 11th (Viñales), 12th (Rossi) and 14th (Quartararo).

DSK tells his story of sex, money and power

SAT will use digital platforms as tax collectors

The Vatican Library shields itself against cybercriminals