Racing the Dakar Rally by motorcycle: from the sand to the hospital 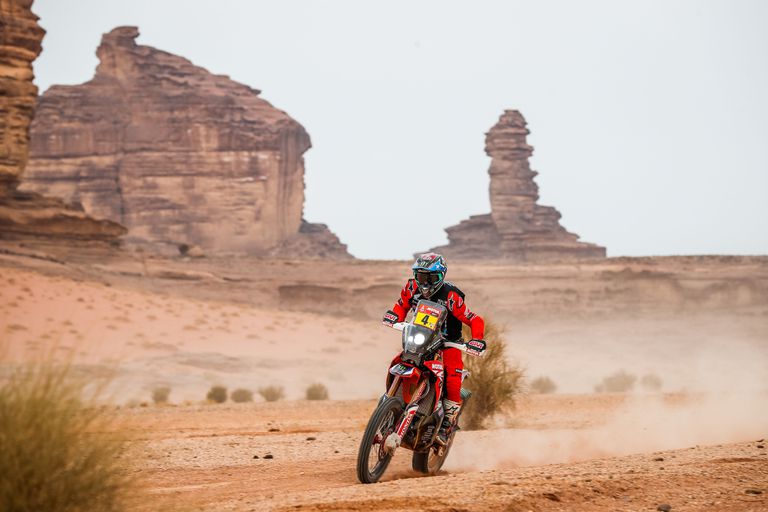 Nacho Cornejo, during the tenth stage of the Dakar Rally, in which he left after completing the special.Antonin Vincent HANDOUT via ASO / EFE

If the Dakar Rally engages, it is because of bizarre stories like those of Nacho Cornejo. The Chilean went to the special on Wednesday, 342 kilometers between Neom and Al Ula, as the leader of the motorcycle general. But it fell. He hit his head and lost consciousness. He got up again. He got back on the bike and completed the stage. The race runs these days through mountainous areas, with sandy tracks, although with a lot of stone and a lot of rock, considerable dangers for pilots who go at full throttle because it is only a few seconds that separate them from their rivals. But Cornejo got on his Honda as if nothing had happened and traveled the approximately 100 kilometers that remained to him to the finish line. With a considerable headache. But it ended. What's more, he did it in 11th position. He had given up just 17 minutes to Ricky Brabec, his Honda teammate and stage winner , which translated into a minimal loss overall. He had fallen to third place, yes, but he was just a minute behind the new leader, his fellow teammate Kevin Benavides.

It happened, however, that upon completing the stage the doctors who examined him forced him to go straight to the hospital: he had a lump on his head and doctors feared he might have a stroke. He had to give up. Tests at Yedda hospital confirmed that he had suffered a concussion, although the scan showed no major damage. Although, he was admitted: he had to remain 24 hours under observation.

In another hospital, in Tabuk, Toby Price (KTM) remains admitted , twice winner of the Dakar and second classified in the general classification when he was faced with the ground a day before. He suffered a head injury and a broken collarbone. The Australian was immediately evacuated. His was only one of the eight abandonments of the day in the most dangerous and fastest stage to date, even though the average was 90km / h, not 120 like the previous days. The road was so narrow and stony that it was impossible to keep up. “The fight is against the race, more than against the rivals,” conceded Joan Barreda, second on Wednesday, when he acknowledged that he too had suffered a severe fall with loss of consciousness on Monday of which hardly any details were given.

This Dakar, which was announced less quickly and with much more navigation than last year's, the first in Saudi Arabia, is proving doubly difficult. Navigation has become twice as complicated with the introduction of a new road book; And the speed in this second week is as high as it was then, when a fatal accident by the experienced Paulo Gonçalves in the seventh stage made the participants reflect.

The terrain is not much different these days. And the escabechina is noted among the favorites in the motorcycle category, the most vulnerable. Five of the pilots who left Jeddah as favorites have left in the last three stages: De Soultrait (Husqvarna), on stage eight; Price, Luciano Benavides (Husqvarna) and Ross Branch (Yamaha, due to engine failure), in the ninth; Cornejo, in the tenth.

So much swing leaves the fight for the Dakar 2021 as tight and unpredictable, led by Benavides with a 51-second advantage over Brabec. With Sunderland (the only KTM among three Honda) third, 10 minutes, and Barreda fourth, 15. There are two stages left. And this Thursday is the longest special (511 km) and one of the most feared. “This Dakar is crazy. Anything can happen every day, ”Benavides.

points out. The car race runs in different directions. As if the calm and know-how of Stéphane Peterhansel took over each stage in this second week in which Carlos Sainz has failed to recover from two crucial navigation errors and only Nasser Al-Attiyah seems to keep up with the Frenchman, who has 17 minutes ahead of the general classification

Ricardo Casares was infected with COVID-19 more than five months ago and still has sequels: "The air is going away"

Is the internet ending as we knew it?: The debate that accelerated with the ban on Facebook and Twitter to Donald Trump