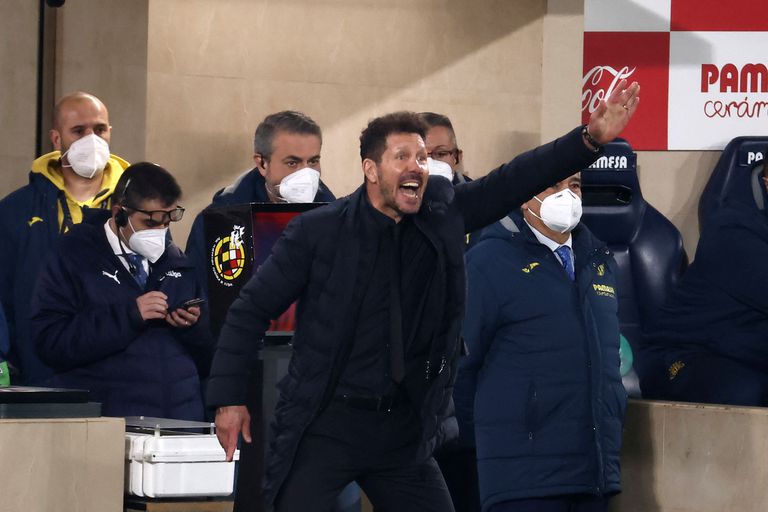 P "Shut up your fucking mouth, caralho", it was possible to read João Félix's lips after scoring the goal that underpinned the victory of Athletic in Vila-real. When he made the gesture after the goal, the seventh in the League, one more since those he achieved in 27 games last year, the Portuguese was outlined towards the benches. It was in the air if the outburst was intended to silence the screams that Simeone proliferates from the technical area. Whether it was for him or not, Cholo opened his arms and outlined a wide smile that also leaves in the air if he betrayed his happiness for having touched the nerve of the only player purged after the defeat against Chelsea in Bucharest. "We would have to ask him," said the rojiblanco coach in the Movistar microphones, and later, in case the dedication of the Portuguese was with him, affirm: "I love that the players rebel." Later, in the press room, he praised the rebellion: “I love the rebellious player, who has pride and wants to change situations. He hadn't scored for a long time, the team needed him, the team needs him and he needs the team. When the players are rebellious and have pride, give it to me ”. Later, Simeone appreciated the Portuguese's performance: “He made a great goal, he responded to what the team needed. We need him well because he is an important player for us. ”

The victory marked Simeone's 308th as rojiblanco coach, which equates Luis Aragonés as the coach with the most wins in official matches in Atlético's history. Cholo has reached this figure in 512 matches, just 100 less than Aragonés (612) .

Atlético's triumph required defensive firmness lost in the last games and the best Oblak. Villarreal finished 19 times on goal, by only six shots from the leader, and made 22 centers to the area for eight from their rival. Possession also went to Emery's team (64%). All without consequences in Oblak's goal. "The truth is that every time we come to play here it is difficult, they always play good football, in the second half we were more comfortable and better positioned to cut off their attacks. We needed this victory, "said Simeone. “We had tickets in the first half where the system had to be changed. We went from 4-3-3, where we couldn't control their game between the lines, to 4-4-2, then to 5-4-1 where Llorente and Koke allow us to press higher. There we were more comfortable and in the end the anxiety, the pressure of Villarreal generated us that they also had the opportunity to score. ”

Despite the harassment from Villarreal in the second half, Simeone did not see the victory in danger:“ The equipment was more compact. Losing 0-2, with the amount of good footballers they have, it is normal that they create danger for you ”. Having broken the streak of eight consecutive games conceding goals was celebrated by the Atlético coach. Again, in times of difficulty, he has sought growth through defensive security. “From being strong defensively, we grow in the team's talent,” Simeone said before describing the requirement that the League obliges: “The championship is difficult, competitive, in the second round all teams have many needs. The places in the Champions League, in the Europa League , the relegation ... There were many who thought that the championship had been broken. ”

At Villarreal, who now has seven games without winning, two defeats and five draws, Gerard Moreno summed up the game from his own mistakes and Atlético's trade: “We have mistakes that cost us goals, when Atleti is ahead it is very difficult to get a grip on them. We have lacked not making so many mistakes. ”