The big blunders of the NBA stars 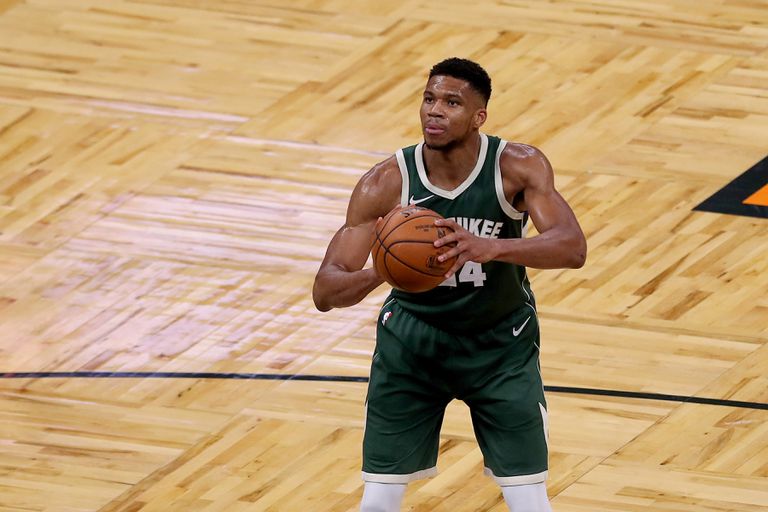 The free throw line sometimes becomes the closest thing to a scaffold. It is assumed that, without any opposition, and now more without the pressure that comes with the usual din from fans, an NBA player must make between seven and eight of every ten shots from the 4.60 meters where the line is located . Giannis Antetokounmpo was approaching those percentages. But on January 15, in the game between Milwaukee and Dallas, the MVP of the last two seasons made only one of the 10 free throws he took. The 26-year-old Greek player, used to dazzle, broke a negative record that day. It was the worst record by a player in Bucks history with a minimum of 10 free throws thrown. A sample of how treacherous the line can be and the contrast between the great brands of stars like Stephen Curry, Luka Doncic or Antetokounmpo himself and their occasional fiascos.

“When I'm on the free throw line, I don't think. I just throw, ”Antetokounmpo explained after his shipwreck, softened because the Bucks beat the Mavericks that day (112-109) and, despite everything, contributed 31 points. “I have done this since I was 12 years old. There are players who probably think when they pitch. I just go to the free throw line and tell myself the things I always say to myself: 'execute with good technique and throw the ball rather high', because I tend to fall short ". There have always been players especially denied on free throws, some among the best in history, such as Shaquille O'Neal , who averaged just over 40% accuracy over several seasons; And now also Andre Drummond of Cleveland, who on four occasions in which he has taken a minimum of 10 free throws, has been 10% correct.

Stephen Curry, at 32, has astonished with his ability to lead the Golden State Warriors again. There were doubts about how long it could take to reach his best level after having broken his hand and having played only five games last season. With a more limited team than in previous years, Curry has assumed command and adds, with 28.4 points, the second best average since he started in the League in 2009. On January 3, against Portland, he added 62 points, the best mark this season in the NBA and the best of his career. A week later, against Toronto, he added only 11, with a horrible shooting card.

"I never thought I would do 2 of 16, I never thought about that," he said relieved that his team beat the Raptors (106-105). “Once I did a 0 out of 11, another time a 1 out of 10,” he recalled. “It is, above all, about continuing to pitch because, finally, you will find your way. You must stay involved in other facets of the game, obviously in defense, try to get rebounds (that day he added 9, plus 6 assists) and, if necessary, be a decoy for the rival defense. There are many ways you can continue to influence the game, even if you are not scoring. I'm not worried about that, "he said.

Luka Doncic added the 29th triple-double of his fledgling career on Sunday, with 36 points, 16 rebounds and 15 assists. Thus, at 21, he surpassed the 28 triple doubles that Michael Jordan obtained throughout his legendary career. But the Slovenian guard ended up disgusted. His team, Dallas, lost precisely to the Chicago Bulls (101-117). "In the second half I played fatal," acknowledged the 77 of the Mavericks. “I was being a bit selfish because I scored 30 points in the first half and, in the second, it wasn't me. I have to improve and that only depends on me. I made some shots that I shouldn't have tried ”. It was another of the contrasts in the performance of the stars in this unusual season.

A start full of personal records

Curry's display with 62 points against Portland is just the tip of the iceberg of a start to the season full of personal records. Three days later, Washington Wizards leader Bradley Beal scored 60 points against the Sixers, the best mark in his nine seasons. The personal stops have followed one another: Hayward, from Charlotte (44 points against Atlanta); Morant, of Memphis (44 against San Antonio); Fox, of Sacramento (43 against New Orleans); Jaylen Brown, of the Celtics (42 against Memphis); Rozier, of Charlotte (42 against Cleveland); Maxey, of the Sixers (39, against Denver) and Coby White, of Chicago (36 against Sacramento), are the first of a long list.

And what a vacation it was!

Euridice Cabanes: "The mobile phone is a spying technology that we carry everywhere"

Green passports are not operational; sanctions are the decision of each country: PAHO