The reproaches preside over the electoral debate of Barca 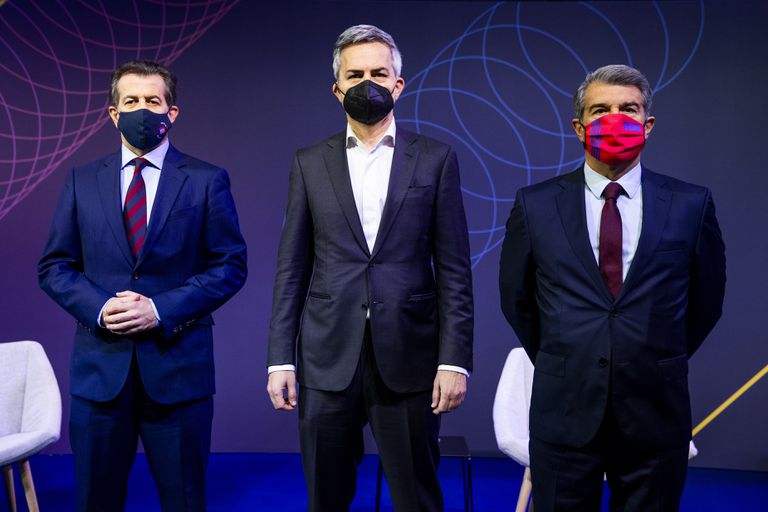 Joan Laporta (9,625 signatures), Víctor Font (4,713) and Toni Freixa (2,634), the candidates for the Barça elections to be held next Sunday, they expressed their differences, sometimes tense and with many reproaches, in a debate organized during the Penyes World Congress, the first of the three scheduled - Rac1 has announced the second for Tuesday and the third will take place on Friday in TV-3 — .

The appointment took place after 22,000 members have already voted by mail —the term ended on Friday—, a circumstance denounced by Font, the candidate who tries to buy time to cut the advantage that Laporta takes from him according to the polls . The former president is the favorite and he was the maximum defender of the fact that the vote had taken place on February 24, the date initially scheduled and postponed by the covid-19

. The biggest discussion focused on the Font and Laporta projects, especially in the sports model, and in the figures of Xavi Hernández, Jordi Cruyff and Albert Benaiges. The Font organization chart, designed by Xavi, includes the figures of Jordi Cruyff and Benaiges. Laporta, however, also has Benaiges while Jordi Cruyff does not hide his friendship with the former president of Barça. Xavi, meanwhile, is waiting from Qatar.

Laporta, who appeals to his leadership and experience, accused Font of "confusing the partner" after being "denied" many times: "The projects are not made with Power Point" . Font's reply was categorical: "If someone finds some statements by Xavi stating that everything I have said is not true, I am withdrawing from the electoral race," he insisted to highlight the leadership of the former Barça captain who currently trains Al Saad.

Freixa, who has gained prominence, is firmly committed to former player Lluís Carreras as sports director and insists on the club's ability to sign two differential players without specifying that they are Haaland and Mbappé. "The Barça model is not to generate income," he said. "Bayern are European champions with a budget of 750 million." Equally optimistic was Laporta, a supporter of bonds to refinance a part of the debt of 1,170 million. "Do not pay attention to panic," stressed the former president, convinced that the situation "is reversible" and hopeful with "reliving the moments lived when the Champions League was won."

Font distanced himself from both: "We cannot maintain a obsolete model, the traditional sources of income no longer have more growth, we must build the Barça of the future with new ideas, change the traditional mental framework ”, an approach described as“ idyllic ”and hardly possible by Laporta.

Although with nuances, The three agreed on the need for Espai Barça, to limit the terms of office to four years and to prevent the club from becoming a SAD. More discrepancies were observed regarding subscriptions and the waiting list and regarding the assessment of previous mandates. "Take away your bitterness and resentment," Laporta told Freixa in a tense moment of the debate moderated by Marta Carreras.