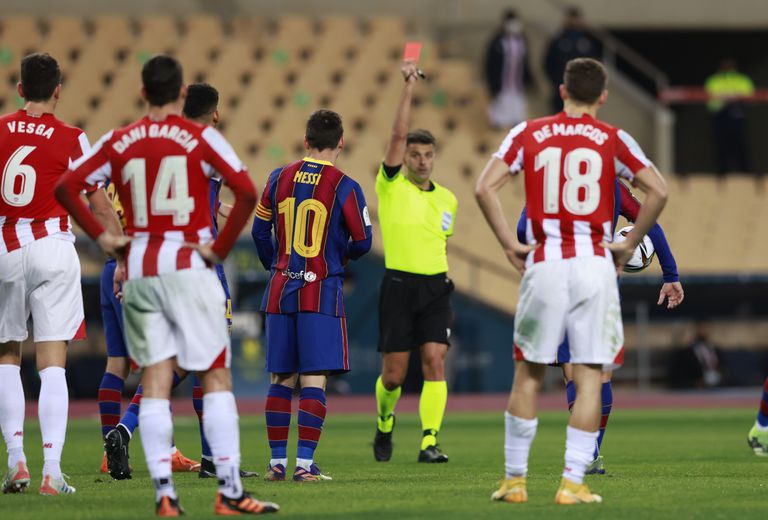 Leo Messi saw the red card in the final of the Super Cup against Athletic.MARCELO DEL POZO / Reuters

Leo Messi has been sanctioned with two games after the action starring Villalibre in the final of the Spanish Super Cup against Athletic. The Competition Judge of the Spanish Football Federation (RFEF), Carmen Pérez, was in charge of making the decision in accordance with article 132.2. As it was not an aggression, as the match referee, Gil Manzano, considered it, the Barça forward is punished with a minimal sanction. Thus the Argentine will miss the matches against Cornellá in the Copa del Rey and against Elche on matchday 20 of LaLiga. The player will be able to return to the competition, curiously, for the League match against Athletic.

Desperate and powerless, Leo Messi was sent off in the final minutes of the match, which was exhausting extra time. It was the first time in 753 games played with the Barça shirt that the current captain of the team saw the red card. As a Barcelona player in an official match, yes.

The first time in his career that Messi was expelled from the pitch, on 10 he was still playing in Second B. It was in a Barça B match against Peña Sport de Tafalla. It was the 80th minute of a goalless match. And Leo claimed a penalty so vehemently that the referee ended up kicking him off the field. He was 17 years old.

A few months later that same year, in 2005, when he was 18, he was not much more mature when he made his debut with the Argentine national team. He did it for just a few moments. Selected by José Pekerman, Messi was on the pitch for 43 seconds. He was fouled and shuffled in such a way that he saw the red.

Many years passed with a spotless service record until Messi, already a star, was sent off again. It was, again, with the albiceleste. In the summer of 2019 and in a match in which the third place of the Copa América was at stake. Argentina was imposed by two goals to zero to Chile when an attack action ended with Leo and Medel measuring themselves with chest blows as in a cockfight. The tangana lasted for long minutes after both were sent off.

So Messi, who is easier to get out of his boxes in a difficult match than to see him star in a hard foul on an opponent, saw his last Sunday, January 17, first red as player of the first team of FC Barcelona. The scoreboard showed a painful 2-3 in favor of Athletic, severe and aggressive in their game, when Messi got rid of Villalibre in bad manners, including slap, to follow an attack play.

Although Gil Manzano did not notice the action initially, he considered that he should expel the player after consulting with the VAR. And Messi saw the red for "hitting an opponent with his arm using excessive force while the ball is in play, but not at a distance from being played", according to the referee's act.