“It is necessary to promote that the submarine cables not only pass through Spain. They make the economy move forward " 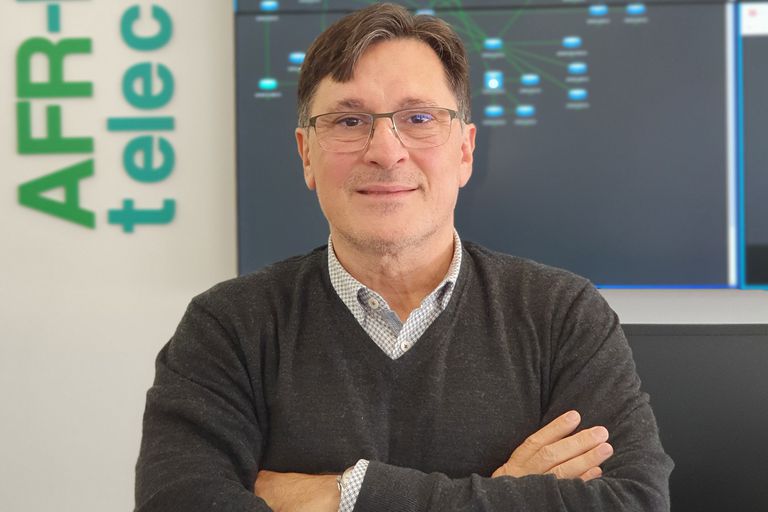 In 2007, Miguel Ángel Acero worked as a consultant on the project known as the Asturcón network, which deployed a fiber optic network in the mining basins of Asturias. “There was a case of a small businessman who had a craft furniture store. In a year it doubled the employees, it generated employment. Another company in Cangas attracted 100 highly qualified people and they have created a large orthographic map processing center, ”he says. Now, the telecommunications engineer has just launched - together with his partner Norman Albi - an incomparably larger project to build an anchoring station for submarine cables in Barcelona. His theory is that boosting that market can have a similar effect, but on a large scale, on the business fabric of the entire country. "We must ensure that the submarine cables do not only pass through Spain," he says. “Those things are what make the economy move forward.”

Acero has been seeing the weaving of the submarine and terrestrial networks that make the Internet possible for thirty years. In Spain, he has contributed as a consultant to the installation of the Balalink cables - which connects the Balearic Islands and Valencia - or Canalink, which connects the Canary Islands. As a co-founder of the company AFRI-IX Telecom he has built a bridge between the world and Africa. "We went where nobody wanted to go," he recalls. Through the capacity that they rented from the Africa Coast to Europe (ACE) cable, they offered connections with Guinea-Conakry, Sierra Leone, Liberia ... “At the time of Ebola, I remember traveling intensively to those countries because it was the way to show that I was betting for them ”, he says.

Now adds the El Sot de Sant Adrià de Besòs industrial estate (Barcelona) to these bets, where it has begun to build the Barcelona Cable Landing Station (Barcelona CLS). This center is destined to become an anchor point for up to eight submarine cables that connect Africa, Europe and North America. The initiative comes at a crucial moment for Spain to play a strategic role in this type of infrastructure. “Spain is on what they call the new silk road. In other words, come from Asia, cross the Mediterranean and jump to the Atlantic as soon as possible to go and connect with the United States ”, explains the engineer.

The project has an initial public investment of 800,000 euros. A small figure for what is expected to contribute to the growth of the Catalan economy. According to the Government's calculations, in five years the digital port can increase the GDP of the autonomous community between 2% and 4%, and generate 50,000 workers in the field of the digital economy, up to 200,000. “Singapore is a city the size of Barcelona and with the same population. It has 20 submarine cables and 60 data centers . They have converted their entire industry from the previous century and now it is a purely digital economy. We don't have to aspire to be Singapore, but we can't stay the way we are either ”, the expert reasons.

Acero is about to put its own plug on the Internet map, after seeing a market grow and completely change that only a decade ago it was totally different. Before the competition was to establish connections, now for speed. The objective is that the contents, rather than traveling, are teleported almost instantly to any place that demands them. “In the gaming business, two milliseconds more speed can make a difference. It is no longer the connectivity: it is where the servers are ”, he reasons. “In the 1990s, everyone put their data centers in Greenland to save on air conditioning. Now they have realized that this is very far and they are going down ”.

While the works in Barcelona progress, it would have to receive its first cable during the first half of 2022. Acero reviews its past in a sector that Spain has never mastered . “Since the 1990s, it lagged far behind in terms of important nodes for international peering ,” he explains. This practice, which makes it possible to establish connections between different Internet networks, was concentrated in the markets of Paris, Amsterdam, Milan or London. "We started as consultants in 2007, when the crisis began, and investments in submarine cables were totally blocked," he recalls. Under those conditions, the routes that could have been anchored in Spain were extended to other European ports, such as Marseille.

Counting on the projects that are still under construction , the Spanish coasts currently register 28 of these connections, according to the Telegeography data. Barcelona CLS at full performance would mean a growth of 28% over the current situation. Is there potential to deploy similar projects in other parts of Spain? Yes, but it is not easy, explains the engineer. For starters, the Internet journey does not end at the shore. The choice of Barcelona is influenced by the surrounding fiber optic infrastructure, which makes it possible to establish the land route of the data through trunk networks - those with the highest density of transmission cables - that will lead to other points in Spain. Access to these highways is not within reach of any beach. "If you don't have the pillars, the building won't hold up," Steel sums up. Bilbao is another desirable hitching point, with trunk lines that go down to Madrid and Barcelona. Not surprisingly, two submarine cables are already leaving the coast of the capital of Biscay, to which Grace Hopper will join in 2022, announced by Google in July. “Bilbao is pushing very hard. We are studying the possibility of replicating the model there. ”

The trunk issue is, according to Acero, one of the factors that put Spain at a disadvantage compared to its European neighbors. “It has not been a very good resolution. In other countries there are laws that make it easier for you to deploy a trunk along a highway, following some rules, ”he explains. Although we have trunks built according to this model, it is not usual. In the opinion of the engineer, there is excessive dependence on electrical and rail networks. “The problem that these suppliers have is that their business is not that. When there is a problem, their service prevails for them ”, he explains. In this context, their role models are the open networks of the Nordic countries. “The concept is that anyone who builds an infrastructure has the obligation to share it at cost. You don't do business, but you don't lose money either. ”

The other barrier is literally at the bottom of the sea. "You can't land a cable where you want to." On the one hand, there are environmental requirements such as those that protect posidonia areas, an endemic aquatic plant of the Mediterranean. This aquatic vegetation limits access to a good part of the Barcelona coastline. "Luckily we found a corridor where there was no posidonia and we were able to enter," adds Acero. Another potential obstacle is the archaeological interest of these underwater environments. “When I did the Canary Islands project it was very difficult to land because of the amount of wrecks there were,” he recalls.

They have applied more than 498 thousand vaccines to health workers: Ssa